A-salt charge: Mike is Dorset’s very own frying squad and he’s coming to a street close to you 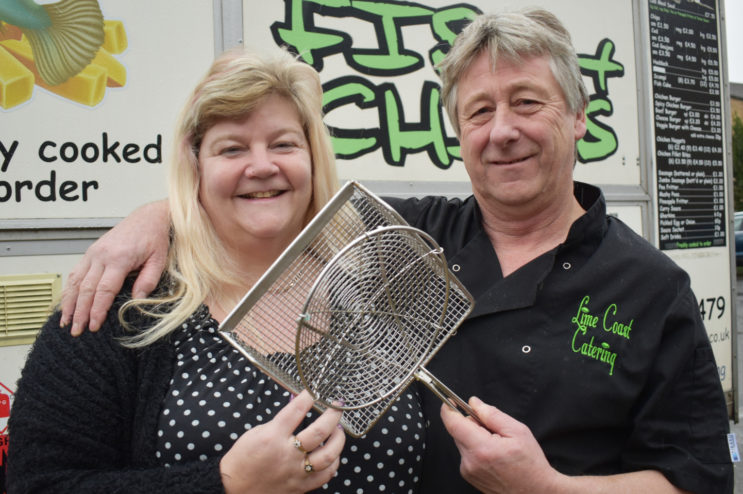 Which is perhaps no surprise.

For Mike, 62, and his wife Rachel, 45, are the proud owners of a mobile fish and chip business, Lime Coast Catering.

On Monday you’ll find them in Colehill and Wimborne; Tuesday it’s Three Legged Cross; Hyde on  Wednesday; Thursday it’s St Leonards and Ashley Heath and the week rounds off on Friday with Alderholt, Gaunts Common and Holt Football Club.

Add in weddings, the occasional funeral, parties, outdoor events and other special occasions and, well, you have one very hectic life.

But Mike, who bought what was already an established business in 2014, said: “I just love it.

“It’s hard work but I have lovely customers who make it all worthwhile.

“Many of the places we go to have no takeaway within easy distance.

“The children point at us and often run alongside the van they get so excited.

“People’s taste may have changed over the years but they still love their fish and chips.

“There’s a huge demand and some nights it’s absolutely manic.”

It’s not just people who enjoy the fish and chips – and other takeaway dishes from burgers to pineapple fritters – served up by Lime Coast Catering.

“We give out free sausages to dogs and they always know when we’re coming.”

Disaster struck soon after the couple, who live in Poole, took over the business.

Their previous van was written off after another vehicle reversed into them.

They were off the road for two months but Mike vowed: “We’ll be back.”

Eight weeks later they were with a newly converted van and a smart, but highly distinctive, livery.

Since then they’ve grown the business, serving new villages and communities.

And while the cost of fish has soared, their prices have only gone up twice in the past six years.

Now Mike and Rachel are finalists in the Business Growth of the Year category of The Family Network awards, held in Bournemouth later this month.

Rachel said: “We’ve worked hard to build up the business and it would be lovely to win.

“But we’re up against some tough competition.

“The fact that we’re got to the finals is a big achievement.

“We’re looking forward to a good evening and if we win, well that will be the icing on the cake for us.”