Back to the future: How Guy’s bad back led to the start of ergonomics company 30 years ago 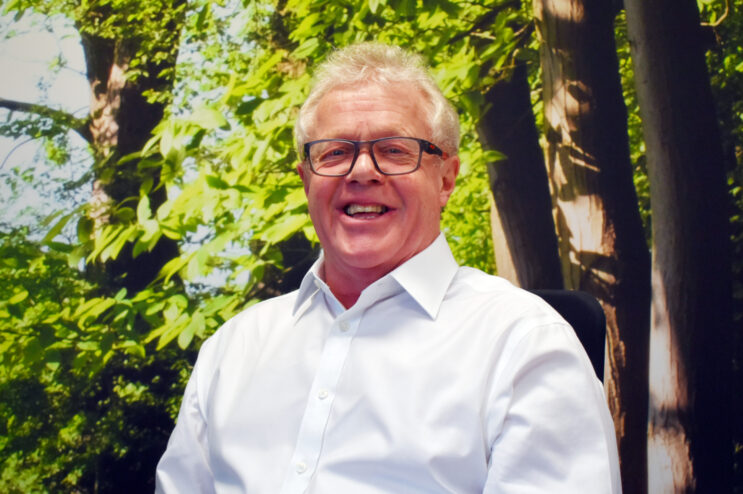 Guy Osmond, Founder, Osmond Ergonomics: “I’d like to say it was all a grand plan, but it wasn’t.” Picture: Dorset Biz News.
By Andrew Diprose, editor editor@dorsetbiznews.co.uk

He may not have felt it at the time but Guy Osmond has cause to be grateful for a bad back.

Because it led to the creation of his business, trading under the name Osmond Ergonomics, which celebrates its 30th anniversary this year.

And not just any company.

But one that actually specialises in improving the physical and mental wellbeing of staff through furniture, equipment or training.

And that includes people…with back conditions.

“Instead, it was a series of unplanned events.

“I’d put my back out and went to see Dr Beth Robertson, my GP.

“She referred me to her husband, James Robertson, who was a rheumatologist at Salisbury Hospital.

“He had designed a desktop desk – a sloping workstation.

“I said I thought we could manufacture that under licence.

“We negotiated a deal with Salisbury Hospital NHS Trust and then showed it at two health and safety exhibitions in rapid succession. 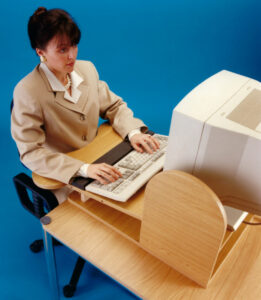 “It got some interest but one product was not enough so we came up with some other things including a footstep, or footrest, and a high step.”

The timing was impeccable.

They became law the following year.

“There were just two or three other companies who had products.

“The first chair we showed was designed by a chiropractor.

“I got it from him because I bought one of these kneeling chairs from a tiny little ad in the back of a computer magazine.

“The only chair manufacturer I knew in the world was this person.

“Then we discovered the Access to Work scheme, at the time administered through the Job Centre and now the Department of Work and Pensions.

“There were funds available for people with disabilities to get them in work or keep them in work.

“So we started offering an assessment service which was based around the DSE regulations.

“It’s still a very big part of our business. 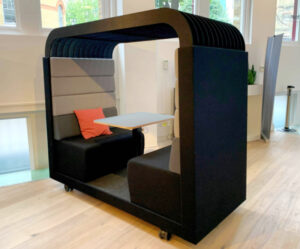 “We can do the pods, the meeting rooms and the individual products but the majority of our business has been what I call an escalated assessment.

“Most of our clients are big corporate companies, government departments, local authorities and multinationals although we’re looking for more SME business.

“The individual employees we see tend to fall into three categories.

“There are those who don’t need anything at all; those who need something small such as a footrest and then someone who’s had a road traffic accident or, perhaps, backache for 20 years or a disability such as an amputee.

“An employer will say this requires skills and products we don’t have in-house and those are the people we talk to.”

After 30 years Guy is widely regarded as the ‘senior statesman’ and ‘go to’ person in his sector.

He said: “I never know whether it’s because I’m regarded as the guru, or they know I have an opinion, but I do get teased quite a lot.

“People bow when I walk onto their stand at exhibitions and the like but I think that’s more of a wind-up than anything else.”

The pandemic, and the move away from offices to homeworking, has led to nothing short of a mini-revolution in working practices.

Guy said: “Historically, pre-Covid, we were dealing with employers who had smart working or flexible working programmes.

“They tended to be more about job sharing, flexible hours and the like. 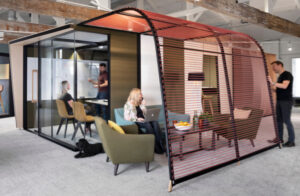 “The term I prefer is agile working, enabling people to work from home or a coffee shop, hotel lobby, train or whatever.

“But it was always driven from the employer out.

“It was very much: ‘Here’s our programme. We’re going to empower you to work from home. It’s a privilege we’re offering you’.

“But underlining a lot of it was quite cynical, how can we cut real estate costs, overheads and all the rest of it.

“It’s gone 180 degrees and it’s now entirely about employers meeting the needs of their staff.

“Now we have to take into account the nature of how people are working.

“We call it the four C’s. Collaboration, Communication, Concentration, Contemplation.

“The changes in the past two years have been enormous.

“As an example, we would visit one of our biggest clients, employing around 18,000 people, and see individual staff in their offices to do the accelerated assessment.

“Now they’ve identified a portfolio of products, not all from us, and created an online portal on the staff intranet allowing them to choose items. 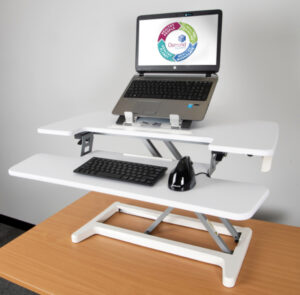 “One of the things we sell is sit-stand desktop adaptors.

“Last year we supplied 41 in the whole year to this client.

“It sums up the enormous pent-up need to sort people out.”

Turnover runs into the millions.

Like many businesses, he describes the past two years as “a roller coaster”.

“The most significant thing has been how unpredictable it’s been and that makes it quite hard to plan. 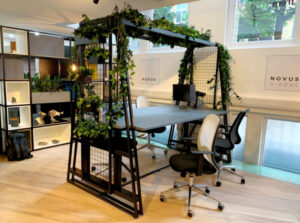 “We completely rejigged our logistics arrangements because that whole original business was geared to taking stuff to people and setting up deliveries from our own vehicles.

“Then, suddenly, we couldn’t get over the threshold.

“If I had to sum it up I would say It’s been an absolute roller coaster.

“But I’m proud of the company, the team we’ve built and what we’ve achieved – and continue to achieve.”