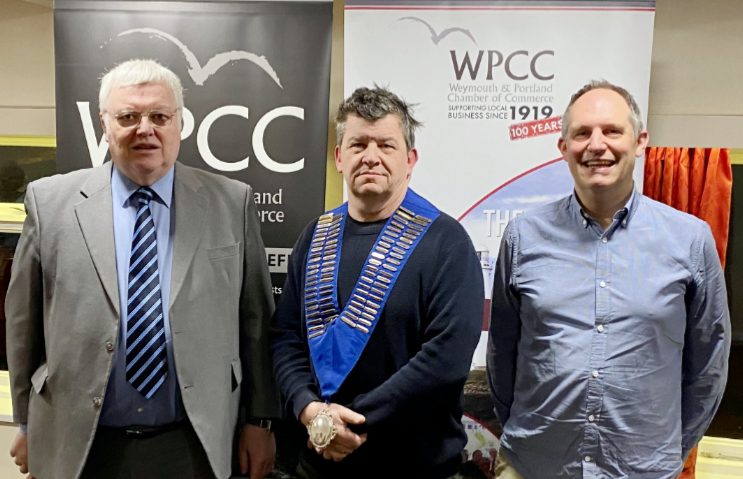 “It’s only day one but I’ve already got 101 ideas buzzing in my head.”

The words of Paul Appleby, the new President of Weymouth & Portland Chamber of Commerce (WPCC).

The Tech Wessex owner has taken the reins from Rick Simmonds, of Verbu, who has been Acting President for the last six months. 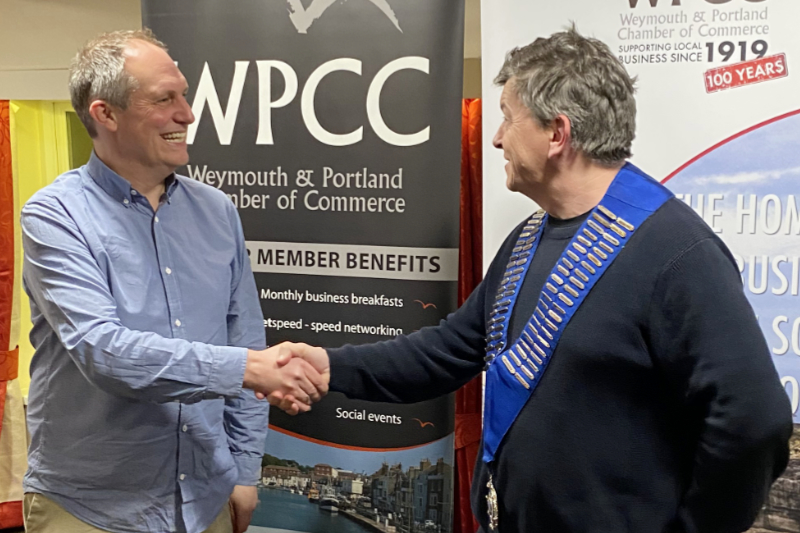 The goal of Rick, pictured congratulating Paul, was to continue the chamber’s work and initiate the return of its successful business breakfast networking events.

Rick thanked previous President, Craig Oakes of Oakes Insure, adding: “I wish our new Chamber leaders, exec committee – and all our members – the very best for business recovery in the coming year.”

Commenting on his new presidency, Paul said: “I feel very honoured and looking forward to spending valuable time with the Executive Board to support, enable and champion all businesses of Weymouth and Portland.

“I’ve been a member of the WPCC Executive Board for over three years, bringing my skills and experience from my own outsource IT management and support company Tech Wessex.

“I hope to continue the excellent work of all former Presidents including Rick Simmonds, Craig Oakes and Andrew Knowles whom I’ve known in my time at the Chamber.”

Brodie Cook, of Albert Goodman, continues as the Chamber’s Treasurer.

The not-for-profit organisation is in its 103rd year of operation and has an annual membership of around 100 organisations and individuals.

The next WPCC breakfast meeting is on Wednesday March 16 at Nanna Moon’s Café Bar.

Yellow Coaches has reorganised its management structure, ahead of the forthcoming summer season.

Jason moves across from Yellow Buses where he has held an operational role for several years. 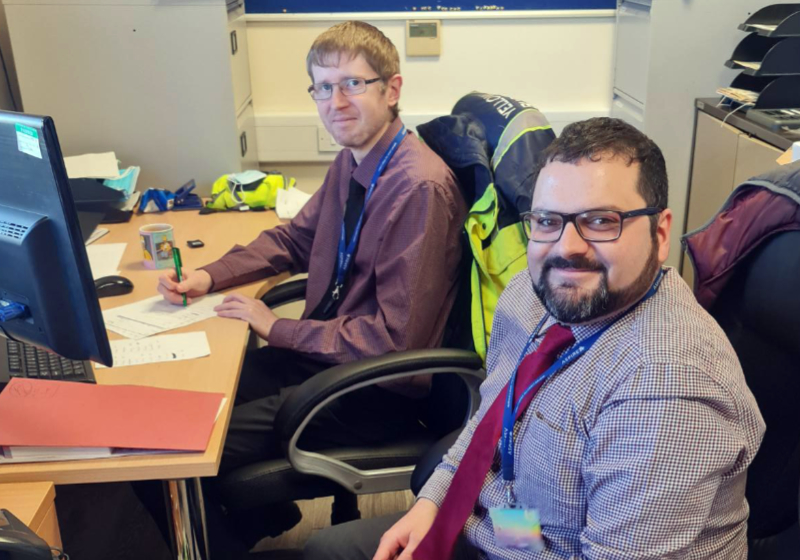 Jay, pictured, front, with Jason, was previously Sales Executive where he was responsible for expanding the coach business.

David Squire, Managing Director, said: “We are delighted to have bolstered this important part of our overall business, bringing both operational and commercial experience together for the first time.” 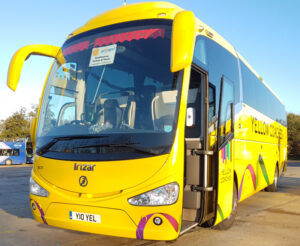 Working together, the duo’s first task was to plan a major rail replacement contract for Go-Ahead.

It’s estimated that more than 11 per cent of Dorset’s population are unpaid carers.

They may be looking after their partner or spouse, a relative, a friend or a neighbour.

The person they care for could have a physical or mental health problem or have substance misuse issues.

In a bid to make more organisations across Dorset aware of unpaid carers, and to make Dorset a more carer-friendly community, Carer Support Dorset has recruited a new Community Engagement Officer. 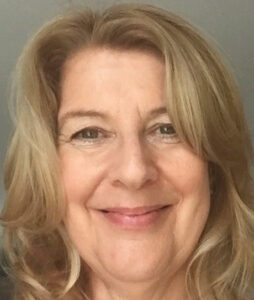 Tracy Rowland, pictured left, has had a lengthy career in healthcare including as a Registered Nurse through to working with Public Health Dorset.

Most recently she has been a Programme Lead, Primary Community Care Directorate with NHS Dorset Clinical Commissioning Group.

Tracy said: “I am looking forward to engaging with organisations to improve the understanding and support available for Dorset’s unpaid carers.”