An outpouring of generosity from the Great British Public, as well as businesses and community groups, has saved a cancer charity from the axe.

Wessex Cancer Trust, a self-funded charity which provides emotional and practical support to anyone living with cancer in Dorset, Hampshire and the Isle of Wight, announced in December that it risked closure.

It launched an immediate £600,000 appeal to save its services after being hit by a ‘perfect storm’.

The appeal sparked an instant reaction from donors, supporters and all the people the charity has helped in its four decades of existence.

“The messages accompanying the online donations really brought it home to us that we make an amazing difference to people’s lives at a time when they most need help.

“It gave us renewed energy to carry on and make sure we are still here for others.”

Now the Board of Trustees has decided the charity can continue into the future. 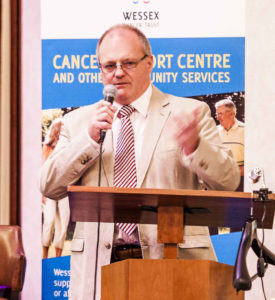 Barry Rinaldi, Chairman, pictured right, said: “I would like to say a huge thank you to everyone who has contributed to our crisis appeal, both in terms of donations and encouragement.

“For a local charity to have raised almost £300,000 in two months is incredible.

“It speaks volumes that so many people have recognised the role we play in helping others through their experience of cancer.

“We acknowledge that this is some way from the amount we asked for, however we remain confident that Wessex Cancer Trust has a future.

“A number of savings have been made to streamline the charity as much as possible within its fixed cost constraints. This has included closing shops, selling assets and reducing overheads.

“To move us forward, our income generation strategy is being accelerated to mitigate the ongoing risks of High Street retail performance, reliance on legacies, and to ensure the charity operates towards a surplus financial balance year on year.

“We hope the amount raised through the appeal, and these plans for our future will give others confidence to come forward to help us continue our fundraising efforts, which we still very much need to continue during 2020.

“The needs of those who come to Wessex Cancer Trust for support continues to be a top priority and the charity wants to continue to give the very best care to the growing number of people affected by cancer.

“For the past year, and based on extensive research and consultation, it has been changing its model of care to better meet the unique needs of everyone living with cancer and provide a more personalised approach.

“In the long term, this strategy will create efficiencies whilst still improving the care to people who need it.

“Whilst we have raised a substantial amount of money and now feel we are in a position to shape the future of cancer care, we are still in a delicate situation.

“If anyone has been waiting to see if Wessex Cancer Trust has a future before donating, I can assure you it does. I urge you to support us if you can.”

Over the coming weeks and months Wessex Cancer Trust plans to launch a number of new fundraising and commercial initiatives to ensure the additional £300,000 is raised.