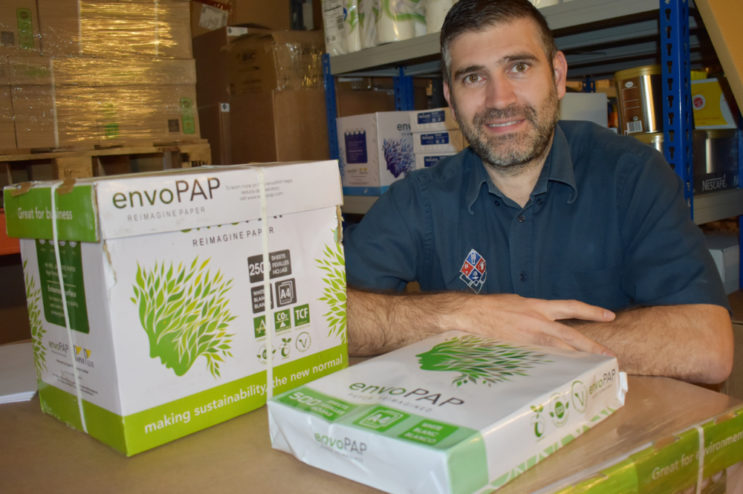 The world’s first treeless paper is now available through a Dorset firm.

Made from a by-product of Indian sugarcane farming practices, envoPAP is becoming increasingly popular with businesses and organisations keen to increase their green credentials.

Every eight reams of carbon-neutral envoPAP saves one tree while one pallet saves 24 trees.

The paper can be purchased via Christchurch-based The Business Supplies Group which believes it is the first stockist in Dorset to offer the sustainable product.

Daniel Taylor, Director, said: “Increasingly our customers are asking for items which are sustainable.

“You could not do better than envoPAP which ticks all the boxes and represents something of a revolution in paper production.

“As word spreads we think it will get increasingly popular with customers who care about the planet and their sustainability.”

While conventional paper requires virgin fibres obtained by felling trees, envoPAP is created using a reclaimed waste product called bagasse, made from the fibres of sugarcane and wheat husks.

After the sugarcane is harvested and the juice extracted at the sugar factory, the wet bagasse is then moved to the nearby paper mill.

The fibres are converted into pulp through an energy efficient and chlorine-free process. The pulp is then processed before being milled and finally pressed into paper.

The sale of the discarded sugarcane stems and stalks creates extra income for Indian farmers, their families and the local economy.

Deforestation accounts for 20 per cent of global greenhouse gas emissions – that’s more than the pollution created by the global transportation sector.

As there is no need to burn the sugarcane waste there is also a reduction in CO2 emissions.

Mr Taylor said: “It’s a win-win. The paper is 100% recyclable and even biodegrades more quickly than paper made from virgin fibres.”

EnvoPAP was started by Kaushal Shah at the University of Southampton.

He saw the potential of turning agricultural waste in his home country of India into usable products such as copier paper.

In 2018 EnvoPAP was a finalist in the Green Tech Challenge – an investment competition for green businesses which have the potential to disrupt traditional supply chains.

EnvoPAP estimates that it has now saved a million trees in the last two years.