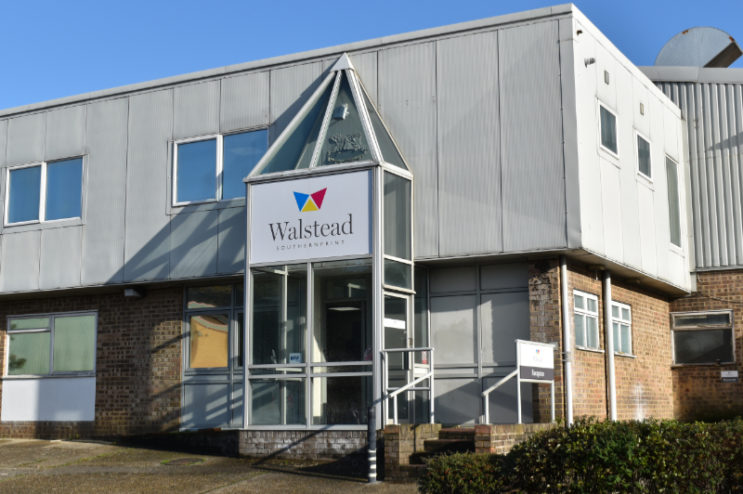 Southernprint’s Factory Road site in Upton, Poole, which is to close with the loss of up to 179 jobs.
By Andrew Diprose, editor editor@dorsetbiznews.co.uk

Unite, Britain and Ireland’s largest union, is seeking urgent talks with the management of a Poole magazine printer following the announcement that it is to close with the loss of up to 179 jobs.

Unite, which has about 40 members at Southernprint, described the news as ‘a serious blow’ to the workers and their families, and, more widely, the local economy.

Southernprint’s parent company, Walstead, is blaming declining magazine volumes for the closure of the web offset site in Upton.

It has entered into a 45-day consultation with staff.

In a letter to staff Paul Toms, Southernprint’s Managing Director, said the past year had been ‘a rollercoaster’ for the business.

He added: “There is one common factor now that continues apace in the wider market, and that is the unwavering demise of UK publishing titles.”

Bob Lanning, Unite Regional Officer, said: “I will be seeking an urgent meeting with management to discuss the business rationale behind this decision – and what can be done to save the site during the consultation period.

“We understand that the closure is being blamed on falling magazine volumes. The print industry across the UK has been struggling for some years because of the way consumers access reading material.

“This is a serious blow to our members, their families and, more generally, the regional economy.

“As a union, we will be giving our members maximum support during the coming days and weeks at what is a very grim time.”

Walstead acquired Southernprint from Newsquest Media Group, publisher of the Bournemouth Daily Echo and the Dorset Echo, in July 2009.

At the time the printing plant employed 330 people.

In a statement, Paul Utting, Walstead’s Chief Executive, said: “It has only been after much consideration that the decision to consult with the workforce at Walstead Southernprint has been taken and we very much regret the potential loss of jobs if no alternatives are found.

“However, the UK’s web offset printing sector continues to face significant structural issues and ongoing reduction in capacity is inevitable.

“We are determined to restructure our business to ensure that we remain competitive and can continue to provide a sustainable business to our clients during the cycle.”

Its UK operation has printing sites at Bicester, Peterborough, Poole and Roche. The Southernprint site is the smallest.

The factory prints for a range of publishers including Immediate Media, TI Media, Bauer Consumer Media, and John Brown Media.

All of the work currently produced in Poole is likely to be absorbed by the group’s three other sites.

Southernprint printed the nationwide classified advertising magazine Exchange & Mart for 56 years from 1944 to 2000.

At the time, it was believed to be the longest-running print contract held by a UK printer.