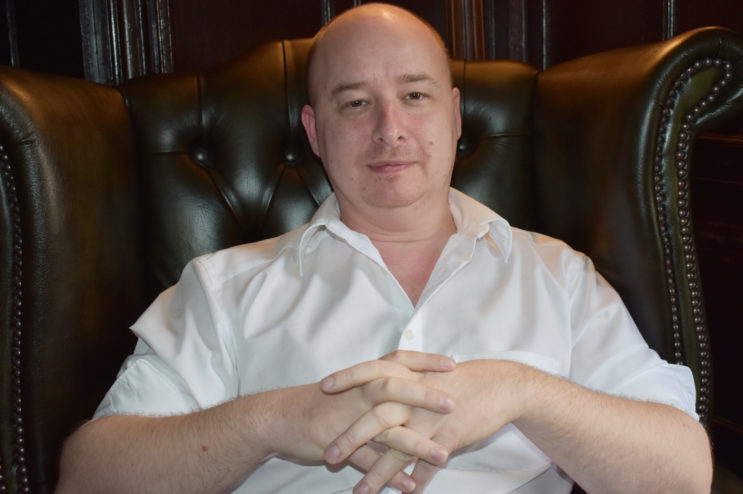 Tom Oswald: “I’m very driven and I don’t do things by half. It’s who I am.” Picture: Dorset Biz News.
By Andrew Diprose, editor editor@dorsetbiznews.co.uk

Entrepreneur Tom Oswald is only too happy to admit he’s a control freak – and proud of it.

“I like to control things to the nth degree. I also don’t like people telling me what to do,” he says. 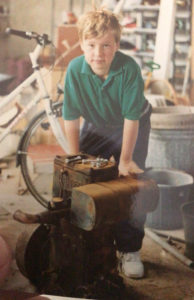 Tom rebuilding an engine at 12…

Which is why the 38-year-old has built a career on challenging accepted norms and carving his own very distinct way in life.

From rebuilding his first engine at 12, constructing a 2.5 tonne electro-hydraulic crane for his GSCE studies at the age of 15 and then building a five axis pneumatic robot arm two years later, it was clear from an early age that Tom was, well, a bit different.

“I’m very driven and I don’t do things by half. It’s who I am,” said Tom, who lives in Wimborne. 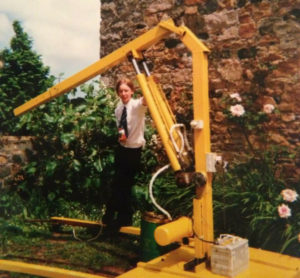 “I get easily bored and I like to be top. LIfe is too short to hang around.”

Born in Guernsey, Tom had his first job at 11 and his first business in vending machines three years later.

He was granted his first patent at 21 when he utilised state of the art cold sterilisation technology and combined it with real-time volumetric measurement systems to save bars thousands of pounds every year. 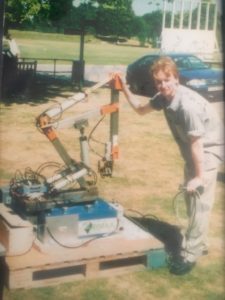 …and a five axis pneumatic robot arm at 17.

His latest project is ClickASnap – www.clickasnap.com – described as the world’s largest, free to use, paid to view, image sharing platform.

Founded by Tom four years ago it now has more than 1m images with 50,000 users a month.

Its aim is to help people earn money for their work with systems in place to sell photos as downloads, physical prints, earn per view and private art galleries.

ClickASnap charges four per cent commission and 0.35p on sales.

Tom, an avid photographer in his spare time, said: “We’re utilising business models used in the music and video industries to pay content creators for their still images.

“It allows them to profit from their online images in much the same way video creators do with YouTube and musicians do with Spotify.

“ClickASnap was long overdue and acts as a real disruptor to established players in the marketplace such as Instagram and Flickr.

“Content creators are paid every time their image is viewed.

“The site is fast and is partnered with Videoscape, our video hosting platform.

“Its start-up was funded by myself and it has great revenue generating opportunities for the future.”

The site has no direct employees with costs kept to a minimum.

Tom, who also enjoys astrophotography, target shooting, scuba diving and clay pigeon shooting, said ClickASnap was a perfect example of his approach to life – and business.

He said: “I won’t accept the norm.

“If I don’t like something then I think up a way around it.