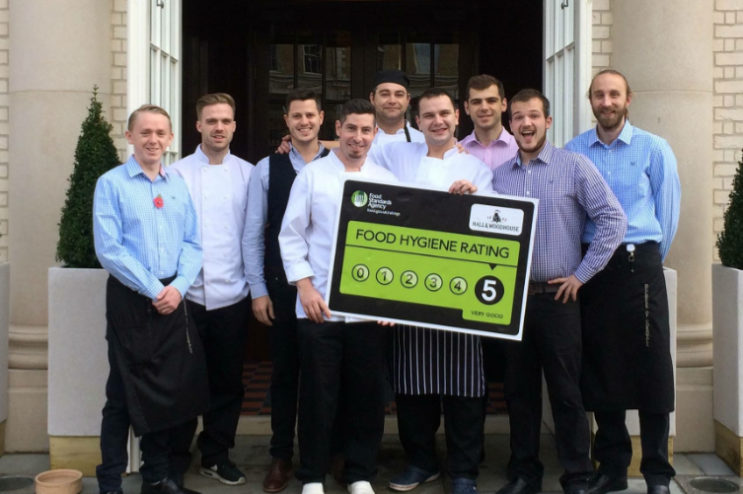 Staff at The Duchess of Cornwall at Poundbury celebrate a top food hygiene rating. It is one of 52 pubs in Hall & Woodhouse’s managed estate.
By Andrew Diprose, editor editor@dorsetbiznews.co.uk

Dorset independent brewery company Hall and Woodhouse notched up pre-tax profits of just over £6m in its last financial year.

The 242-year-old firm, which has a managed house estate of 52 pubs including 14 in Dorset, made a pre-tax profit of £6,020m in the 12 months to January 26, according to full-year accounts filed with Companies House.

That compares to £9,286m in the previous year but that figure included a £3,262m gain from the sale of property.

Mark Woodhouse, who stepped down as Chairman earlier this year, said the company had performed strongly despite “significant headwinds across a number of areas within the business.”

He added: “As with previous years, and in line with our ongoing strategy, we continue to invest heavily behind our pubs, our brands and our teams. Borrowings increased slightly to £56.5m (2018: £51.5m).”

In January Matthew Kearsey took over as Managing Director while former MD Anthony Woodhouse was elected Chairman at the company’s annual meeting in May.

Hall & Woodhouse was founded in 1777 by Charles Hall who opened a brewery in the village of Ansty. It is still family owned and currently under the seventh generation stewardship of Mark and Anthony Woodhouse.

The company brews the award-winning Badger ales as well as running the managed house estate of 52 pubs.

Hall & Woodhouse has invested more than £30m into Dorset over the past five years, on top of its regular and extensive charity donations.