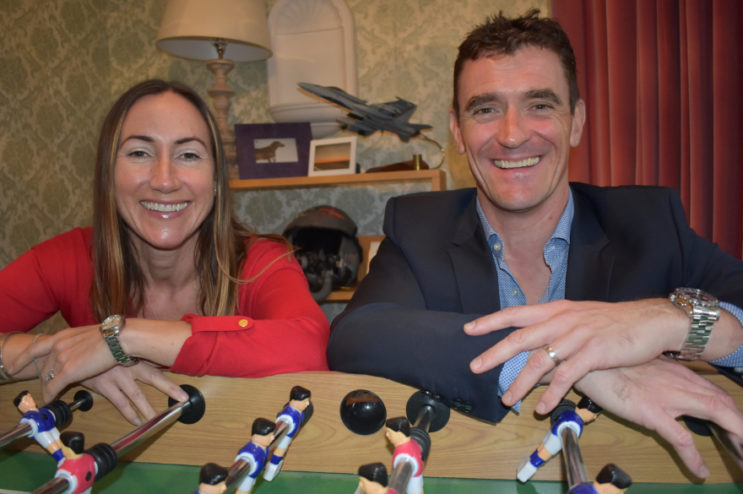 A fighter pilot badly injured after ejecting following a mid-air collision five months ago has come back to earth in more ways than one to build his thriving property business.

Former RAF Harrier and F18 pilot Dave Ashley sustained a broken back and fractured eye socket after ejecting during air combat manoeuvres while training in Qatar in July.

Initially, it was feared he had lost his right eye after what Dave, 47, described as a particularly savage parachute landing, especially with a broken back.

The father-of-two, who was 18 years in the military before joining BAE Systems as a fighter pilot instructor, spent the summer recovering from his injuries.

He has now relocated from the Middle East to Branksome Park, Poole, to devote all his energies to Ashley Property Group (APG).

The business, run by Dave and his wife, Heather, specialises in helping people wishing to build wealth through property but lacking the time or knowledge to do it alone.

Dave, who secured a flying scholarship with the RAF at the age of 17 and has been on multiple tours on combat operations, said: “I’ve always been interested in property, mainly as an accidental landlord because of all the moving we’ve done over the years.

“We’ve continually increased our own portfolio while acting for other people, operating from wherever we were living overseas.

“In the last year APG has dealt with over £1m worth of property and we have 17 clients and 109 properties.

“Some of our clients never see their properties because we source, renovate and then fill them using our trusted partners around the country.

“At a time of low interest rates you’re looking at a six to eight per cent minimum return.

”Our investors come from all over the world and we then find people in the UK for joint ventures.

“We currently have ten projects on the go and are getting into land developments and new builds with our first one in Doncaster, South Yorkshire.”

Heather, who enjoyed a high-flying retail career and has a MBA with distinction, said they had chosen to settle in Dorset because of the quality of life and “fabulous scenery.”

She added: “We take care of everything for our clients with understanding their financial goals our first and most important priority.

“We selected Dorset because it’s just such a fabulous place to live. We’re going to become fully involved in the business community and will be taking on a PA and an apprentice as well.”

Dave said APG had won an award this year for raising finance from Paul McFadden Wealth and been nominated for three others.

“I have received some of the best training available anywhere and both Heather and I are very excited at growing the business from our new Dorset base. The opportunities are huge,” he added.