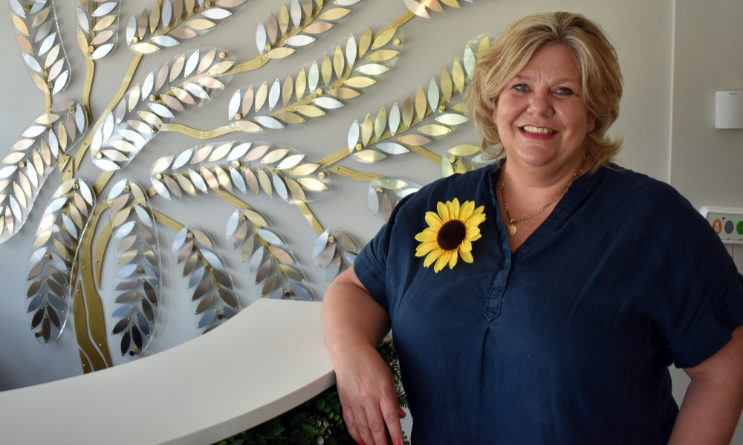 Clare Gallie smiles when the description, by someone who knows the CEO of Lewis-Manning Hospice Care well, is put to her.

Then she, modestly, bats it away insisting: “I’ve been lucky to have the support, and backing, of the nicest people I’ve ever met.”

No doubt that’s the case.

But if one person is responsible for changing the fortunes of a much-loved charity that hit difficulties, then it’s Clare.

The former Director of Fundraising, Marketing and Communications at St Margaret’s Hospice Care in Somerset had spent 25 years working in various roles with cancer charities.

She faced the challenge of a lifetime when she took the reins of Lewis-Manning Hospice Care in February 2019.

A decision to have an inpatient unit at its then Crichel Mount home in Lilliput meant the charity was spending more than £1.2m every year on beds alone.

“Two of those NHS hospices – Forest Holme in Poole and the Macmillan unit at Christchurch Hospital – are in East Dorset.

“It was quite evident that our inpatient unit was not sustainable into the future.”

Tough choices had to be made, resulting in the closure of the Lewis-Manning inpatient facility and the loss of full and part time jobs.

Meanwhile the Lewis-Manning day hospice in Lilliput, bequeathed by Marjorie Lewis-Manning, was showing its age and a decision was needed on its future.

Six options were presented to the charity’s trustees including finding a buyer or using part of the existing facilities.

In September last year it was announced that Care South, the not-for-profit residential care home provider, had acquired the Crichel Mount site.

It paid £4.1m and will be developing a care home, including specialist dementia support.

The home will be named Marjorie House in honour of Lewis-Manning’s founding benefactor.

The sale allowed Lewis-Manning to pay off three loans totalling around £2m.

But now the clock was ticking.

Lewis-Manning needed a new home, but one with specific requirements.

Meanwhile the case of a 94-year-old cancer patient from Wimborne had further persuaded Clare of the value of creating ‘hubs’ in Swanage, Wareham and Wimborne.

She said: “This poor lady had been forced to spend more than 12 hours with us at our day hospice because of the difficulty of getting transport which was delayed at the last minute to get her home.

“It really affected me and brought home how we needed to bring services such as better breathing, bereavement support and hospice care, closer to our patients and families in community hubs.”

But still the clock was running down for a new home.

Clare said: “What do you do when you’re looking for a new home in a particular area?

“You just get in the car and drive around.

Starting, and finishing, at Poole Hospital the trio were nearing the end of the trip when Clare noticed a former doctor’s surgery in Longfleet Road with a ‘for sale’ sign.

It appeared perfect for the charity’s needs.

Two subsequent offers for the property by Lewis-Manning were declined before an unnamed ‘white knight’ helped the charity secure the building for £801.000.

“I cried when I heard the news because I knew this was the one for us,” said Clare.

Building and renovation work by Greendale Construction Ltd costing £350,000 has now resulted in “a light, modern but warm” new home.

Clare said: “I couldn’t be more pleased and the feedback we’re receiving has been excellent.

“We’re so fortunate that, thanks to the generosity of individuals and companies, we’ve either received things like the flooring and office furniture free of charge or at a heavily discounted rate.

“So many people, and so many organisations, have been so supportive.

“The Talbot Village Trust donated £150,000 and many have bent over backwards to help us.

There is still much work to be done but Clare, who like many has lost family members through cancer, has the satisfaction of knowing she has made a difference and helped create a lasting legacy.

She said: “I enjoy getting out of bed and knowing that whatever happens during the day I will be helping someone.

“I feel so privileged to do what I do.

“My role is to bring people together and work in partnership.

“I just feel a great sense of pride at what we’ve achieved so far.” 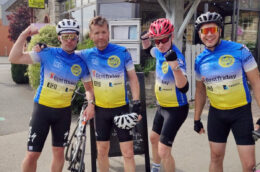