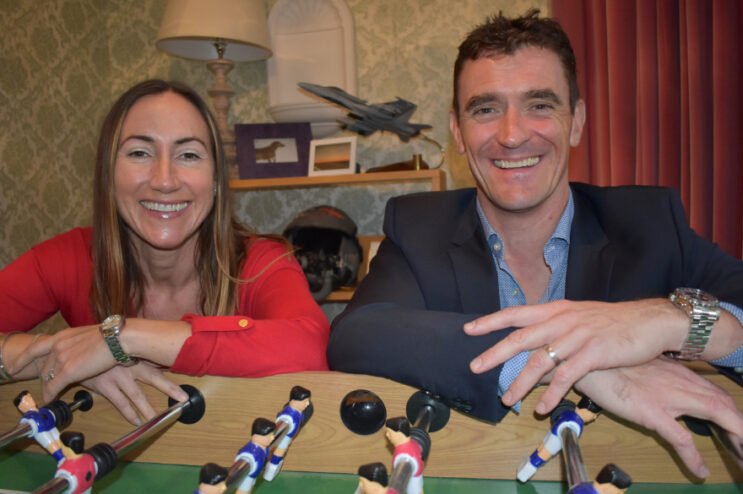 A former RAF fighter pilot who founded a thriving property business after cheating death in a mid-air collision three years ago has died in a training flight in Italy.

The married father of two, from Branksome Park in Poole, was 49.

The other pilot, named as Giampaolo Goattin , survived with slight injuries.

In 2019, Dave, a former RAF Harrier and F18 pilot, sustained a broken back and fractured eye socket after ejecting during air combat manoeuvres while training in Qatar in July.

Initially, it was feared he had lost his right eye after what Dave described as a particularly savage parachute landing, especially with a broken back.

Dave, who was 18 years in the military before joining BAE Systems as a fighter pilot instructor, spent the summer recovering from his injuries.

He subsequently relocated from the Middle East to devote all his energies to Ashley Property Group.

The business, run with his wife, Heather, a fellow Director, specialises in helping people wishing to build wealth through property but lacking the time or knowledge to do it alone.

At the time Dave, who secured a flying scholarship with the RAF at the age of 17 and had been on multiple tours on combat operations, told Dorset Biz News: “I’ve always been interested in property, mainly as an accidental landlord because of all the moving we’ve done over the years.

“We’ve continually increased our own portfolio while acting for other people, operating from wherever we were living overseas.

”Our investors come from all over the world and we then find people in the UK for joint ventures.”

Heather, who enjoyed a high-flying retail career and has a MBA with distinction, said they had chosen to settle in Dorset because of the quality of life and “fabulous scenery.”

The 51-year-old subsequently founded her own successful business, Heather Ashley Health and Fitness.

A full investigation is to be carried out into the crash.