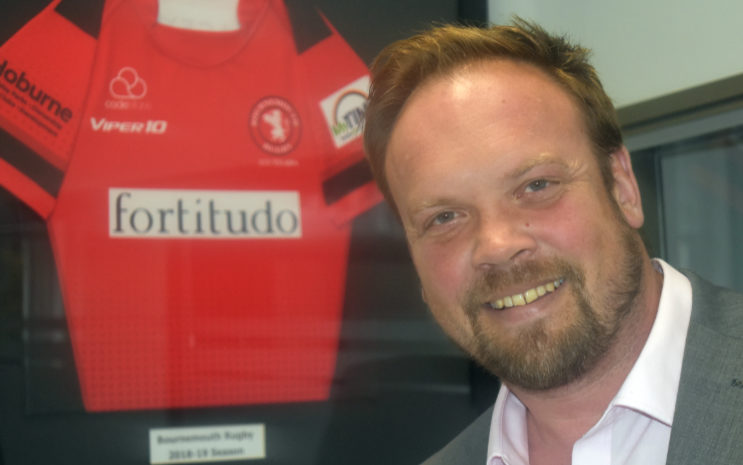 James Croker, Head of Strategic Partnerships, Fortitudo, with, in the background, one of the Bournemouth Rugby shirts displaying the company’s name as a main sponsor. Picture: Dorset Biz News.
By Andrew Diprose, editor editor@dorsetbiznews.co.uk

James Croker’s life has all the ingredients of a sporting drama.

Becoming a professional rugby player at 18, only to see his career cut short when his club, Richmond – the first professional team in England – was placed in administration.

Suffering a heart attack at the age of 29 after a tear in one of his arteries.

And, two years later and on the eve of promotion, discharged from a career he loved in the Royal Air Force on medical grounds.

“It was really difficult to come to terms with the combination of the heart attack and the medical discharge,” said James, 42.

But while the curtain may have come down suddenly on his playing days, a new career in rugby coaching and management beckoned.

For the next nine years the father of two was to hold several high-profile positions including Director of Rugby at Basingtoke RFC, Director of Sport at Daneshill School in Hampshire and, from 2016 until June this year, CEO of Bournemouth Rugby.

“Fortitudo is a main sponsor of Bournemouth Rugby and Richard values many of the sporting values such as work ethic, team spirit and resilience.

“We had a meeting, got on well and I joined in August,” said James.

Fortitudo, based in Lower Parkstone, is growing – and growing fast.

Staff numbers have increased from five to 11 and, shortly, 13.

The company has already completed 80 units (houses/flats) to date with 480 in planning and a further 480 in the pipeline.

Projects range from single dwellings to upwards of 200 flats.

High profile schemes due to get underway in the coming months include a 75-room hotel and spa with a further 65 apartments at Salterns Marina and 64 flats on the former Poole Pottery site at Poole Quay.

“We will always try and maintain the character of an area with sympathetic architecture while concentrating on the quality of the build.

“Our developments include Help to Buy and mixed-use schemes with retail below and flats above.

“It’s the future of the high street.

“We’re totally behind the government’ ‘build, build, build’ programme and see ourselves as part of the solution to many of the housing issues facing the country.”

“It’s very fast-paced but aligns totally with my values of trust, teamwork and respect.

“I’ve worked so hard on building those values and I would not work anywhere that didn’t fit in with them,” he added.

And what’s it like working for Richard Carr, at the very least a controversial and colourful businessman?

“Yes, he has a direct business approach but Richard is very different to his public image.

“I see part of my job as showing the real Richard.”