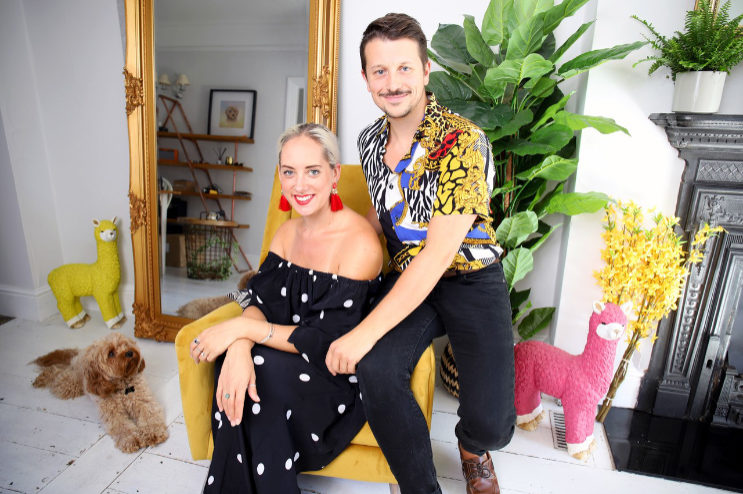 It started with a single handmade birthday card.

But this was no ordinary card.

Frank Nicholls really pulled out the stops for his partner, Pennie Bryant.

The smug tomcat was handing a heart-shaped balloon to his unimpressed feline sweetheart.

The ‘card of cards’ had a sticky heart-shaped seal.

Inside,  the envelope was lined with a colourful feline pattern to match the main image.

And as a final loving touch, Frank hid a matching miniature envelope inside, containing tickets to a London show.

That card, in 2013, was to prove the inspiration for the couple’s business, Tache. 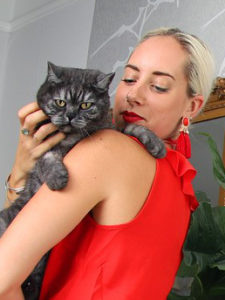 Named after Frank and Pennie’s cat – she has a moustache-shaped marking below her whiskers hence the name – the hand-crafted greetings card company now produces hundreds of thousands of cards every year.

They’re sold across the world including by some very famous, and prestigious, retailers. 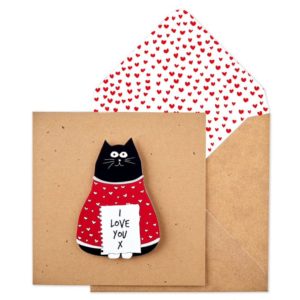 From Fortnum & Mason, Harrods and Liberty of London to Fenwick, John Lewis and Paperchase.

But back to that first card.

Frank, who was then a web designer, said: “Pennie was out of work at the time.

“She was feeling pretty down and I really wanted to cheer her up.

“I spent days on that card.”

After Pennie’s birthday the card was put on one side until, months later, it was to prove to be the catalyst for Tache.

Pennie had resigned from her company after a relocation made her commute to work impossible.

She said: “I was in the house all the time and struggling to stay positive when, one day, I chanced upon the birthday card that Frank had made for me.

“The sight of the card made me smile immediately and then, once again, inspiration kicked in.

“It occurred to me that, unlike normal greetings cards, which are given merely as an accompaniment to a gift and usually end up in the recycling, this card really was a gift in itself.”

Frank said: “We designed our first ten cards at the end of November for Christmas 2013, with quirky and creative designs that were unlike anything else on the market.

“All of our cards came with a specially designed printed envelope and matching envelope seal, creating a modern twist on the traditional wax sealed envelopes.”

Within its first year of trading, Tache cards were stocked in more than 100 independent retailers across the UK. 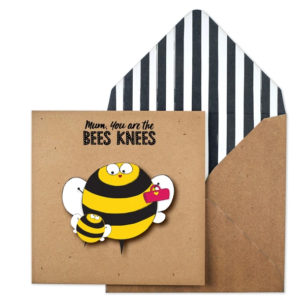 Now, approaching their seventh year as Tache, the cards can be found in thousands of outlets across the UK and internationally.

They also retail online via tache.co.uk and Not on the High Street with prices starting from £2.99.

It also has a team of ten freelance home-workers, who make the cards.

For Pennie and Frank, building a business from scratch has been both exciting and eye‐opening.

It’s included learning about the greeting card industry, where 85 per cent of all cards purchased in the UK are by women, and developing a business strategy.

Pennie, 29, said: “It’s been a huge challenge to learn everything related to business.

“Both of our backgrounds were purely creative and neither of us had any previous experience of running a business.

“We were both learning everything as we go.”

The environment has figured large in the couple’s thinking. 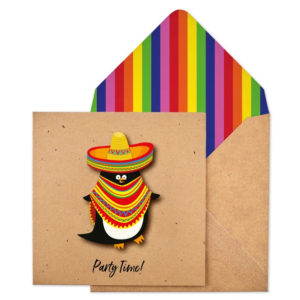 Frank, 33, said: “Being advocates of waste reduction and users of eco-friendly materials, we use recycled materials.

“We aim to create cards that will be viewed as a personal gift that the recipient will want to keep forever rather than throw away.

“It seems to be working ‐ we have had a number of customers tell us that they loved their card enough to put it in a frame.”

Future projects include working with Movember to produce a range of male cards, helping raise money and awareness for the men’s charity.

It is also launching personalised vouchers to go in the brand’s signature mini envelopes on the lines of Frank’s original card to Pennie.

Pennie said: “I would also love to one day to put the quirkiness of our brand into the atmosphere of our own Tache shop.

“It will further cement the memory of where it all started when Frank gave me that first wonderful card. “