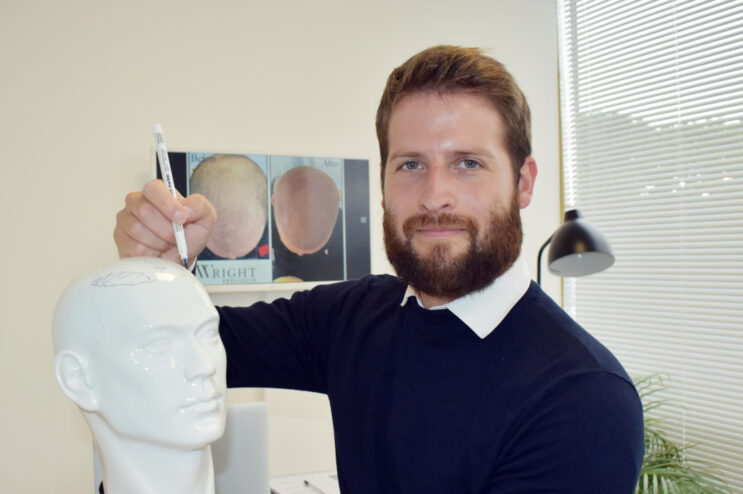 James Wright: “My treatment has given new hope to all those looking for an affordable solution.” Picture: Dorset Biz News.
By Andrew Diprose, editor editor@dorsetbiznews.co.uk

“I love it. Seeing the faces of people that have had the treatment done is amazing. They walk away a different person.”

So says James Wright, Director of Wright Precision and a specialist in scalp micropigmentation (SMP).

It’s a non-surgical, non-invasive hair loss solution for men and women which can camouflage thinning hair, scars, alopecia and even total baldness.

Big in America, and growing fast across the world, the procedure involves inserting pigments into the scalp, very close to the skin.

Using a carbon-based ink, the treatment lasts anything from six to ten years and, unlike hair transplants, the cost runs into hundreds, rather than thousands, of pounds.

The results, says James, can be life-changing.

“He came to me and I gave him a full head of hair for minimal cost really. The first thing he did was to hug me.

“Another client appeared on a TV game show and said she would never have had the confidence to do that before her treatment.”

James operates from a clinic in Christchurch.

It’s very much his home turf after growing up in nearby Burton and attending The Grange School in Christchurch.

Initially he trained as a plumbing and heating engineer at Bournemouth & Poole College before relocating to Dubai for nine years.

James said: “Rowaida became my mentor and I learnt all the aspects of running a successful business, travelling the world, speaking at conferences and promoting the group business.

“I then spent time in the freelance industry, working as a model, actor and representative for some of the largest brands including Adidas, Louis Vuitton and Tesla to name just a few.

“This allowed me to manage my time and build a good reputation in the industry, most importantly learning marketing techniques. 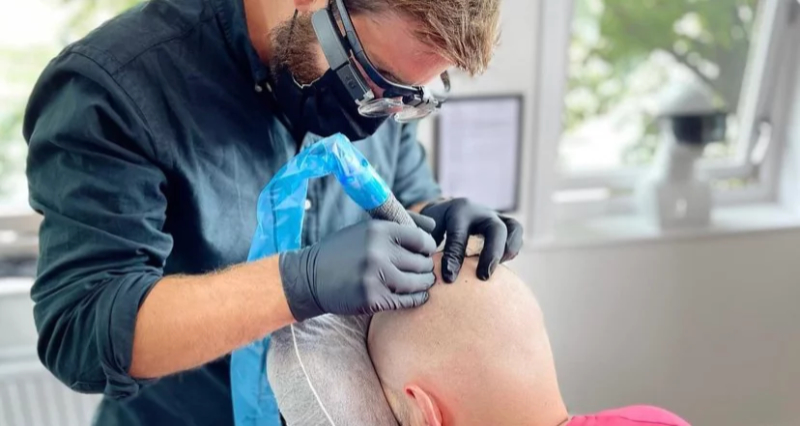 “The idea of a hairless clinic came in the final year before I returned home in 2020, teaming up with Advanced Hair Studio.

“This opportunity presented a good insight into the hairless industry and the effects it has on all those suffering from it.

“I had an invitation to meet with the CEO of the Middle East, Sanket Shah.

“It firmly sealed my decision to return home and set up my own clinic.

“The overwhelming feeling of changing people’s lives is the reason I chose this path.”

After undergoing his SMP training in Scotland, James launched his clinic in January this year.

He said: “People mistake it for tattooing but it’s so different.

“The handling, ink, needle depth and colouring is all different.

“The only real thing in common is that it involves a needle on a machine.

“Most of my clients are in the evening because they’re working during the day, or they need the time to let the scalp heal because there are thousands of needles going in.

“People feel a slight touch but often on my reviews they say they can’t feel anything. Some people even fall asleep.

“Even if you look closely you can’t really tell that someone has had the treatment.

“I do my sessions in three or four stages if it’s a full head.

“The first session I do lightly.

“I have a colour chart so we work out what it will look like on their skin and how it will come out.

“I try and match the hairs if they’ve got any around the side.

“Then I go across the sessions , usually it’s ten days to two weeks between each session.

“From there we blend it in.

“It takes a long time with a full head, around five hours a session.

James, who’s 31 and lives in Branksome, Poole, said his clients ranged in age from 18 to their 60s. 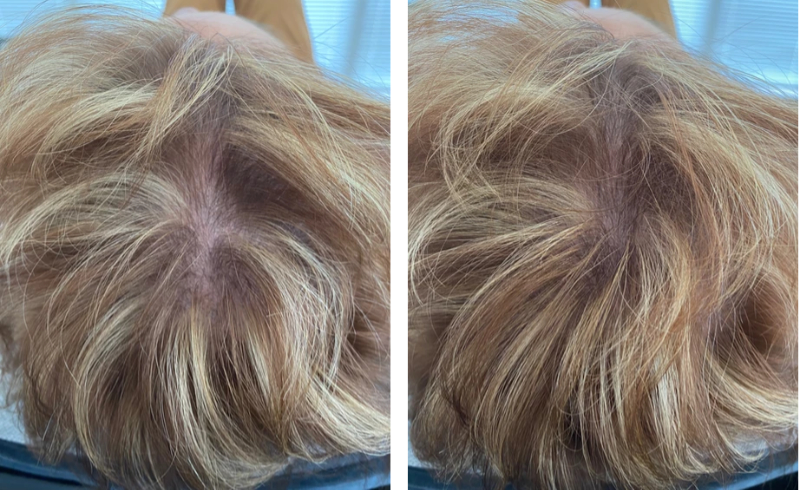 Many are women with thinning hair density.

He said: “There are a lot of illnesses that cause hair loss and stress at the moment.

“The thing about scalp micropigmentation is that it works with everyone and is a guaranteed result.

“Unfortunately, a lot of my clients have struggled with their mental health because of hair loss, even to the point where they’ve not left the house.

“My treatment has given new hope to all those looking for an affordable solution.

“In time, I’d love to take more people on.

“I have a five to ten year plan on where I want to be.

“Obviously I’d like to open more clinics and employ people. I’d also like to do more consultancy as well.

“You’re not going to get any growth from what I do but you will get results which will lead to, possibly, a new life.”