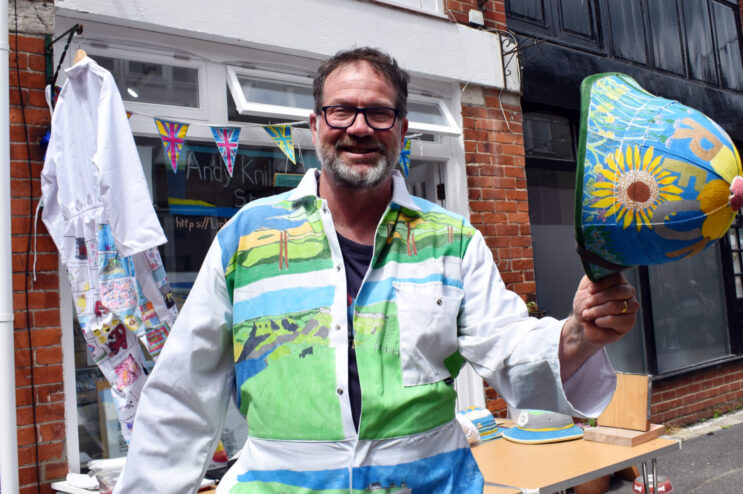 Andy Knill believes that art should be fun.

The 58-year-old artist, known around Swanage for his distinctive boiler suit and pith helmet, also likes to practise what he preaches.

Which is why the ex-teacher organises free ‘Art for Fun’ drawing sessions at his Commercial Road art studio, four days a week from 10am to 5pm.

He started last September and, to date, 564 have taken part. 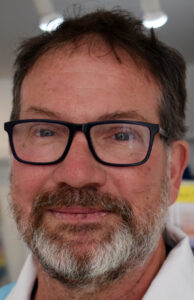 Andy, pictured left, who draws with coloured marker pens, said: “I gain from the mental health benefits of drawing and I thought it would be nice to share that with other people.

“I heckle people as they go past and encourage them to get involved .

“It’s about getting different ages to have a go.

“It’s very popular with children as there are lots of colours.

“I set the youngest age at three but, in fact, we’ve worked down to a 16-month-old while the oldest has been in their 80s.

“We can have up to ten people around the table outside. They just turn up as I don’t do a booking system.

“When people do it they start to talk to each other and ask questions like: ‘How did you do that? What are you drawing?’

“It breaks down barriers and you get all sorts of ages talking to each other. 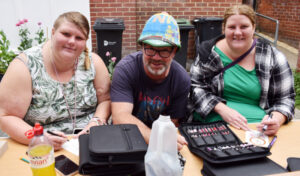 Art has been a saviour for Andy who lives in Swanage and is married to Anne with two sons, aged 26 and 24.

A teacher for 28 years, he moved to the resort in 2016 to take up a new post but – after seven breakdowns in 16 years – found he couldn’t face returning to teaching. 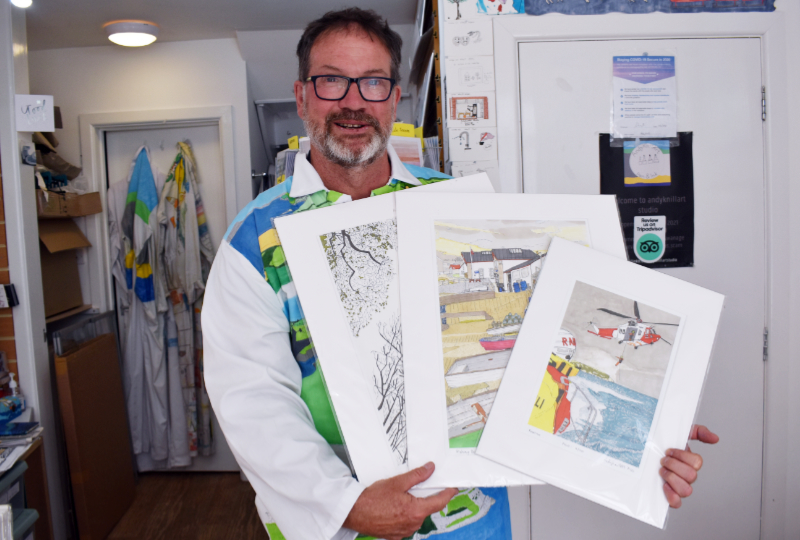 Andy said: “I just decided ‘No, enough. That’s it with teaching’.

“The family had moved down two weeks before so I told them: ‘I’ve walked out of my job and I’m not going back’.

In fact, Plan B turned out to be Andy’s artistic skills.

Discouraged from pursuing art at school at 13, he’d taken it up again in 2015 after a teacher friend recommended it as a way of switching off from work.

Andy said: “As a geography teacher, I drew diagrams on boards for around 30 years but I never thought of them as art. It was just to explain things.

“I started enjoying doing the drawing for myself and switching off.

“When we moved here I thought: ‘Just a minute, I draw in marker pens which made me different from just about every other artist in Purbeck.

“I approached the Tourism Information Centre and found out that their biggest income came from the beach huts but they didn’t have a postcard, or a card, with beach huts on it.

“So I cheekily said ‘You don’t have any but I have this design’ not knowing how it would go because it was sheer guff.

“They bought a hundred cards from me and then commissioned some other designs.

“It was then that I turned around and said: ‘Oh, by the way I’ve never sold any art before.’

“Some of those designs have since become classics in my collection.” 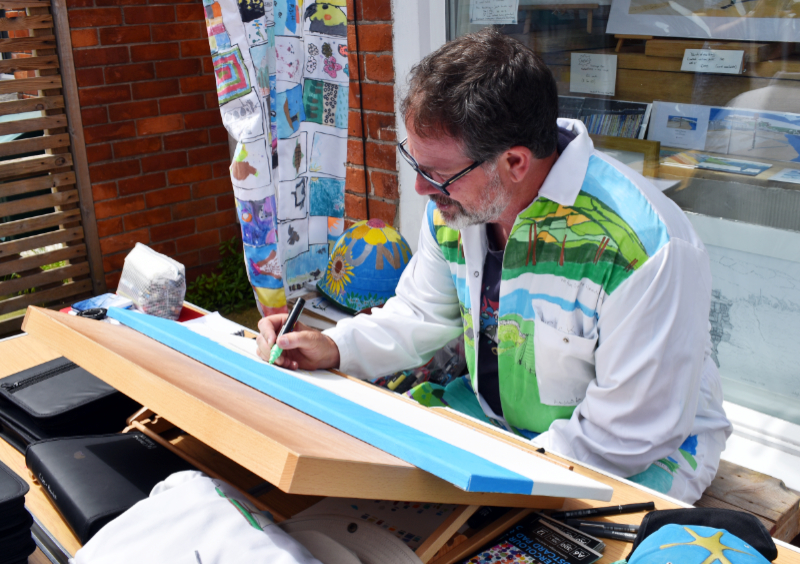 Slowly, but surely, Andy built up his art business, taking part in craft markets and enjoying a guest slot with Purbeck Artisan Yard in Wareham.

Meanwhile his involvement with Purbeck Art Weeks saw the number of pieces to his name go from eight in 2017 to 60 the following year.

Andy said: “I had been thinking about doing a hat of some sort and decided to buy a pith helmet and draw a design on it.

“For Purbeck Art Weeks I actually put in a boiler suit and pith helmet as examples of my art.

“The boiler suit hanging up got lots of feedback.”

And,  six years after quitting teaching, he’s also back in the classroom – but in a very different role.

He said: “I’ve just done a project for the third time with Swanage Primary School where I was invited in to be a local artist.

“The first year I drew some original pieces which I left with the school but the last two times I’ve done a boiler suit and the children have drawn on it.

“I’m at home in the classroom and it feels fantastic.

“I’m not in charge of the classroom but I’m going in and spreading this joy about doing the arts.

“I didn’t like the admin – and some of the things about education drove me nuts – but I love working with young people and with people, generally, doing things.

“That’s why I love doing Art for Fun.

“If I’m remembered for anything I would like to think it will be for doing ‘Art for Fun’ and giving people the chance to have a go and enjoy themselves.”