“I’m like a dog with a bone and I won’t let go” says Susan, the property consumer champion 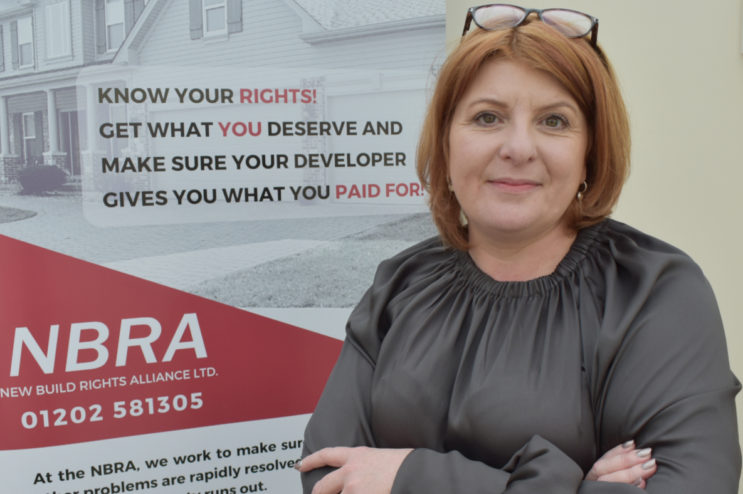 Susan Coborn of the New Build Rights Alliance: “I am very tenacious and 100 per cent on the side of the consumer.” Picture: Dorset Biz News.
By Andrew Diprose, editor editor@dorsetbiznews.co.uk

“I am very tenacious and 100 per cent on the side of the consumer,” she says with special emphasis on the word ‘very’.

Which could be your worst nightmare if you’re a builder dragging your feet on putting to rights any snagging issues – or worse – with a new property within the warranty period.

Then, again, it could be the answer to your prayers if you’re a house owner, mortgaged to the hilt and at your wits end with, seemingly, nowhere to turn.

Her business, which she believes is unique, fights for the consumer who has bought a new build property but has hit problems.

It could be roof issues, problems with drainage, internal walls or window and external door defects.

In fact anything that requires snagging, or more, but, for whatever reason, the builder is choosing not to put right.

And that’s where Susan, and NBRA, step in.

She said: “Our aim is to work with the developers of these properties within their liability period to achieve the objective of the agreed snagging and defect works being undertaken at no charge to the consumer.

“We will use proven methods and positive communication to ensure snagging and other problems are rapidly resolved before the warranty runs out.

“I am very persistent and will not take ‘no’ for an answer.”

Under the NHBC Buildmark scheme, any problem with a new property raised within two years of the completion date (up to three years in the case of shared parts), is down to the builder to put right.

Then, for the next eight years and expiry of the policy, Buildmark protects the owner if there is physical damage to certain structural parts of the home caused by the builder’s failure to meet the NHBC requirements.

But it’s that first two years, said Susan, when problems can really occur and where NBRA can take up the cudgels for owners at the end of their tether.

She said: “Often a homeowner has been sold a dream, is maxed out with their mortgage and working all hours to bring in the money.

“They find there is a problem with the property, go back to the developer but discover that they’re doing their utmost to evade the issue.

“If it goes beyond two years then settlement of the problem can end up coming out of your pocket – and that is so wrong.”

Susan worked for a social housing provider for eight years including four as Latent Defects Officer.

Latent is defined as a fault in the property that could not have been discovered by a reasonably thorough inspection before the sale.

“I saw the effect it was having on our tenants but we were able to get things sorted for them.

“But who can you turn to when you’re a private homeowner? That’s what gave me the idea for the New Build Rights Alliance.”

Susan, who lives in Bear Cross, charges £30 per hour, broken down into ten-minute chunks, but works on a ‘no win, no fee’ principle.

A face-to-face meeting is the first step in the process of representing an aggrieved homeowner.

“Without question some developers are better than others but, in general, customer service has to improve throughout the sector.

“Our job is not to seek confrontation but to clearly identify the issues and then confidently and positively seek a resolution on behalf of the client,” said Susan.

She added: “I have a massive moral compass and will always do right by my clients.

“My job is to represent them at what can often be a very stressful time.

“But make no mistake, I know exactly the responsibilities builders and developers have and will make sure they’re held fully to account.”