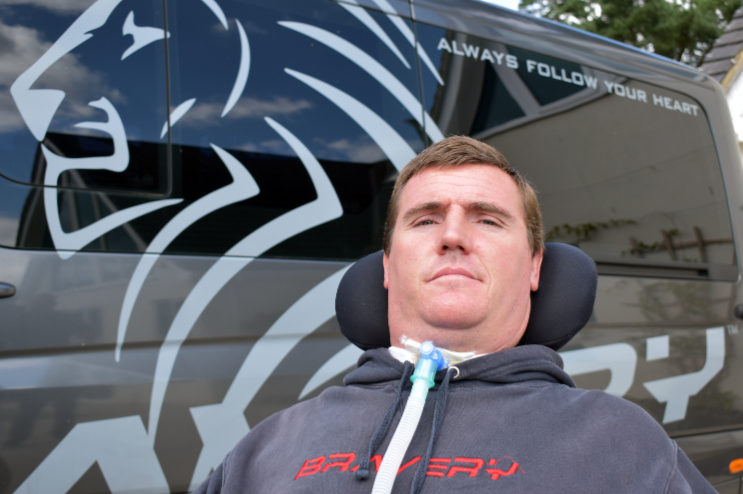 Former Royal Marine Tobias Gutteridge, Founder of the extreme clothing brand, Bravery. He was paralysed from the neck down in Afghanistan in 2009 when an enemy bullet severed his spinal cord. Picture: Dorset Biz News.
By Andrew Diprose, editor editor@dorsetbiznews.co.uk

The Oxford Dictionary definition is ‘courageous behaviour or character’.

The human definition is sitting three feet in front of me. 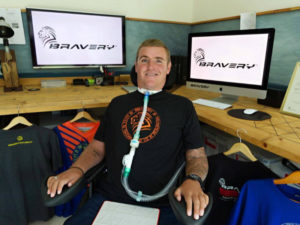 Talking with the aid of a ventilator.

Paralysed from the neck down after a bullet severed his spinal cord while serving as a Royal Marine in Afghanistan 11 years ago.

The word inspirational is often used, and for good reason.

But Tobias Gutteridge’s story really is just that.

It’s about an individual determined to overcome his devastating injuries and build a business.

And the name of that business?

Fifteen years ago life looked very different for the sports-mad South African, then 20 and with his heart set on joining the British military. 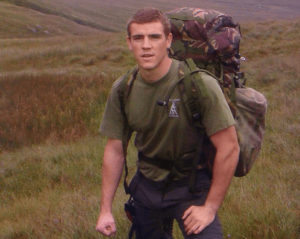 To become a Royal Marine was his ambition.

The day he received his coveted green beret still ranks as one of the best of his life.

Two tours of Afghanistan at the height of the conflict were to follow.

Tobias said: “We were right in the thick of it.

“Temperatures of 45 degrees, Afghan flu with vomiting and diarrhoea and, all the time, being shot at.”

It was on an operation in North Afghanistan in 2009 that the then Lance Corporal Gutteridge’s life was to change forever.

As Tobias, and fellow corps, broke through a barricaded door they were met with a hail of bullets from five enemy positions.

One of the bullets went through his neck, instantly severing his spinal cord.

Tobias said: “I was knocked out cold and then in a coma for a long time after that.

“I was repatriated and woke up in the neuro intensive ward of the Queen Elizabeth Hospital in Birmingham about a month later.

“It was complete touch and go.

“I was as close as you can get to losing it.

“To get me back from Afghanistan to the UK was a miracle in itself.”

A life confined to a wheelchair and paralysed from the neck down.

With 24-hour support and an ICU nurse always in attendance.

But, as a fiercely independent individual, one of the biggest adjustments was to work on his patience.

He said: “I’ve always been naturally impatient but now I’m relying on others to get the job done.

“People don’t always work at your pace or do things the way you would.

“I’ve also had to learn to articulate things better.”

It was in 2013 when Tobias, who lives in a specially adapted house in Broadstone with his long-term partner Savannah Turner, 30, decided his life needed a new focus.

First he decided to study A-levels at the Bournemouth & Poole College.

He took four – and passed four.

That was followed by a BA Business Studies degree in operations and project management at Bournemouth University.

He got a first-class honours.

And all the time Tobias, a lover – and active participant – of extreme sports before his injuries was putting in place the building blocks of his new business.

Called Bravery – and with the strapline ’Always Follow Your Heart.’

Selling extreme clothing for the brave.

From surfing to skydiving.

And soon to start retailing skateboard decks as well.

Tobias said: “I haven’t had a mentor.

“I’m totally self-taught, picking up tips over the years and learning everything from designing the logo and trademarking the company to doing spreadsheets and business finance.”

Bravery now sells its clothing range across the UK and is about to take on its first employee, a Head of Graphic Design, in August.

It prides itself on being ethical and sustainable with all its packaging – from the smallest labels to the biggest shipping boxes – totally environmentally friendly with zero plastic.

Bravery’s ethos is that fortune favours the brave.

Its website states: ‘You can make a difference whether it’s in your life or someone else’s life.

‘Life is short, chase your dreams, live your passion but most importantly Always Follow Your Heart.’

Tobias said that although he gets his dark days he has no regrets.

He said: “Savannah, in particular, has been so supportive both in the business and in helping me with my injuries.

“I’m proud of what I’m achieving with Bravery but I’m very self-critical and never fully satisfied.

“As for joining the Royal Marines, and the life I chose, I would not have changed it for the world.

“The experiences, the colleagues, the camaraderie – it was, and remains, a great part of my life.”