Flashback – Our 2019 interview with Tony Brown: “Do I think Beales has a future? I’d hardly have bought the company if that wasn’t the case.” 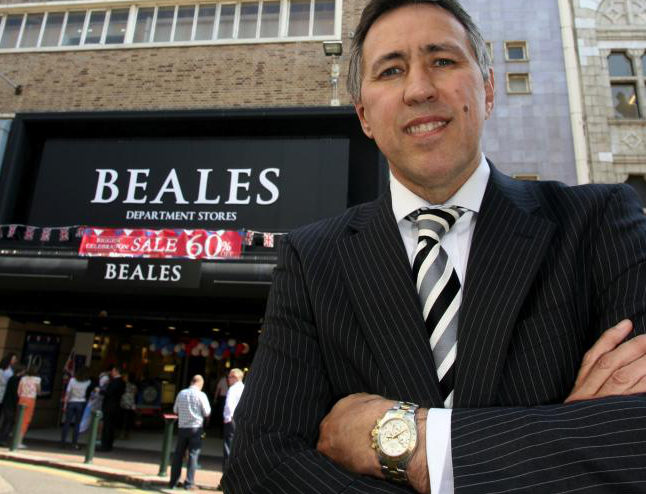 Tony Brown is a man who likes a challenge – and by any standards he’s got a mighty big one turning around Beales in what can best be described as a retail storm.

The department store group is as synonymous with Bournemouth as its beaches and gardens. It’s been a constant presence in the resort since 1881 when John Elmes Beale first opened what remains to this day as the company’s flagship store.

But times have changed. The department store format is struggling as never before.

Debenhams and House of Fraser have their own well-documented problems and even John Lewis, seen as the shining beacon, announced last week a major restructuring amid falling sales. It is also reportedly seeking discounts from its landlords.

But Tony Brown refuses to be beaten, even if he feels like his stores are trading with one arm tied behind their back.

“We face a number of factors which are totally outside our control, whether it be uncertain political conditions, changes in the National Living Wage or increased pension costs. It’s a very challenging climate and pretty tough,” he told dorsetbiznews.

“But do I think Beales has a future? Of course, I’d hardly have bought the company last year if that wasn’t the case. But to survive the retail format will have to change.”

Beales, which has 22 department stores in England and one in Scotland, is now trialling a number of different formats.

Its Hexham site in Northumberland no longer operates as Beales but instead under the name Hexham Outlet Centre, selling solely outlet goods.

Mr Brown says both are trading well so is that the future for Beales?

Could stores such as Bournemouth adopt a discount or outlet format in the future?

“There is no question of Bournemouth becoming a discount store. It will continue to sell premier brands but the High Street has to change dramatically in the coming years, and that includes Beales,” he said.

“There has been zero engagement with retail and there seem to be no plans for a town centre vision.”

Stressing he is speaking in a personal capacity, and not as a BID director, he bemoans the general state of Bournemouth which, he believes, is putting off customers.

He is also disappointed at what he claims is the lack of interest shown in retail by the political leaders of the newly formed BCP Council.

“Since the new administration was formed there has been zero engagement with retail and there seem to be no plans for a town centre vision,” he said.

Despite the odds, Mr Brown insists Beales is here to stay, albeit in a different format.

“We’re making real progress on a number of fronts and I’m confident about the future,” he said.