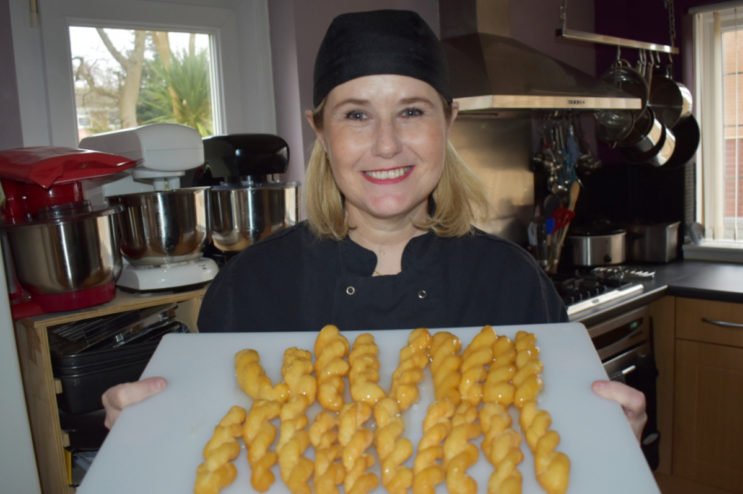 Tracy Cooper of Ikhishi Bakes with a tray of Koeksisters, donut like dough twisted into shape and smothered in syrup. Picture: Dorset Biz News.
By Andrew Diprose, editor editor@dorsetbiznews.co.uk

She was ten and the country was South Africa. 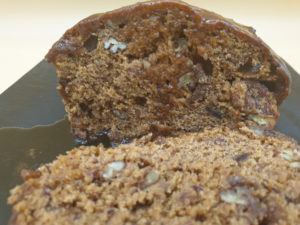 It was the start of a love affair with baking which resulted – 40 years later – in the launch of her own business, Ikhishi Bakes.

Now, just over 12 months on, Tracy supplies African themed desserts and puddings to pubs and restaurants, both locally and, in the very near future, London.

All prepared from the kitchen of her home in Bransgore. 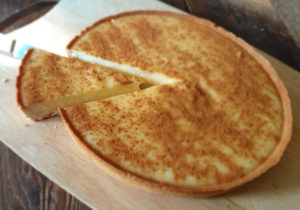 Milk tart, a creamier version of custard tart with a rich spicy topping.

Tracy, 51, who was born in Zimbabwe, said: “My gran used to sit me on the countertop and teach me how to make these delicious desserts, tried and tested over many generations.

“It’s the one thing I really remember from my childhood. my most abiding memory, and I’ve loved making them ever since.”

The launch of Ikhishi Bakes – Ikhishi means ‘kitchen’ in four African languages – was not the most conventional of beginnings.

He was planning the launch of his new South African themed restaurant, Zim Braai, in Commercial Road, Bournemouth.

Andy was intrigued to hear of Tracy’s baking skills and, in particular, her mastery of traditional South African favourites.

They include Koeksisters, a donut like dough twisted into shape and smothered in syrup, and Cape Brandy (Tipsy Tart), a dessert packed with dates and pecan nuts and then covered with a spicy brandy sauce.

The milk tarts are a creamier version of the custard tart with a rich spicy topping.

A meeting and tasting session was arranged with Andy and his chef.

Tracy said: “Andy ate one of the Koeksisters and said: ‘Ah this is heaven. Fantastic.

“There and then he said he’d like to place an order for his launch party and could we do it? I said, yes, of course.

“When we left, Lauren and I looked at each other and said: ‘Now what are we going to do?” 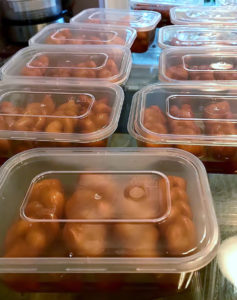 Boxes of Koeksisters lined up for delivery.

The answer was to create Ikhishi Bakes and since that meeting with what was to become her first client, Tracy has never looked back.

These days Zim Braai, where Tracy provides three desserts – Koeksisters, Cape Brandy and milk tarts – has been joined by other customers including the Bat & Ball in Breamore, near Fordingbridge.

The pub serves traditional English pub food but with a South African twist.

Production of the desserts is planned with military precision.

Eight hours on a Thursday, from 6am, is set aside for the baking of Koeksisters.

That adds up to 16 boxes with each containing eight – 128 Koeksisters in total.

The rest of the day is spent baking items such as peppermint crisp tart. 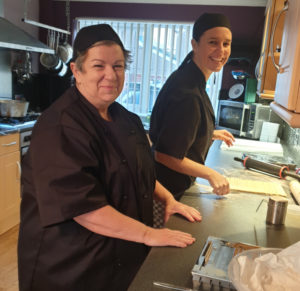 Other products, including Cape Brandy and milk tarts, are made on a Monday while the rest of the week is devoted to deliveries and paperwork.

Tracy is assisted in the kitchen by her daughter, Lauren, and fellow bakers, Sam and Thelma.

“We have the music on, there’s lots of laughter and we just love what we do. It doesn’t feel like work, “ said Tracy.

“We use the very finest ingredients and are very proud of our baking. We don’t set out to get praise but we do receive a lot of it.”

Tracy met her husband Mark, Commercial Manager at Alan & Thomas Insurance Group, at the age of 14 in South Africa.

They’ve been married 31 years and have two daughters.

As for the future, Tracy said: “I’m ambitious and want to grow the business. However, you have to walk before you run and we’ve only just completed our first year.

“I do think, though, that there are lots of possibilities for us. I’m excited.”