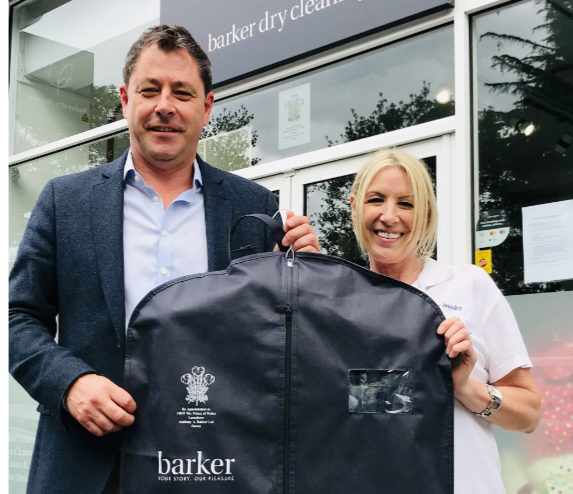 A Dorset business which is the UK’s largest domestic laundry company has committed to reduce ‘single use’ plastic by 90 per cent by the end of next year.

Barker’s eco mission is now well underway, having converted nearly all of its domestic laundry customers to long-lasting Barker laundry boxes over the last two years.

The business, which is also a specialist dry cleaner, has now introduced a new initiative in its dry cleaning divison. It is initially being rolled out in a trial at the company’s Sherborne branch in Dorset.

Customers have the option to:

Proceeds raised from the polythene packaging will be donated to the business’s charity, MyTIME Charity for Young Carers.

Matthew Barker, Managing Director, said: “When packaging represents such a large and important part of our final product, with the requirements for hygiene and protection from damage, we have been slaves to the most viable and efficient form of packaging – plastic.

“As a business, by far and away the largest use of plastic is in our dry cleaning division. Currently, all dry cleaning that leaves our premises is draped in protective polythene.

“We are determined to ultimately eliminate this practice, which has driven us to launch this new, reusable garment cover initiative.

“We are immensely proud that Barker is the first dry cleaning company nationally to work towards the eradication of plastic packaging and would urge our customers to support us in our efforts.”

If the Sherborne trial is successful Barker hope to extend the initiative to all of its branches by the end of the year. They include Ashley Cross, Poole, Ferndown and Bournemouth.

“With our customers’ help and support we hope we can achieve our ambitious goal of reducing ‘single use’ plastic by 90 per cent by the end of 2020 and in doing so start to put pressure on the rest of the industry to follow suit,” said Mr Barker.

He added: “This is requiring a significant investment from the business in the initial stages but I believe it is the right course of action.

“We will never lose plastic – it is probably one of the most effective wrappers ever invented – but the way in which we use it and handle it will make all the difference to the future of our planet.”

Apart from its laundry operations, Barker is also the global leader in the supply of starched dress to the legal profession and film, TV and theatre industries. Its work can be seen in hit TV programmes including Downtown Abbey, Peaky Blinders and Mr Selfridge.

The company can trace its history back to 1861.