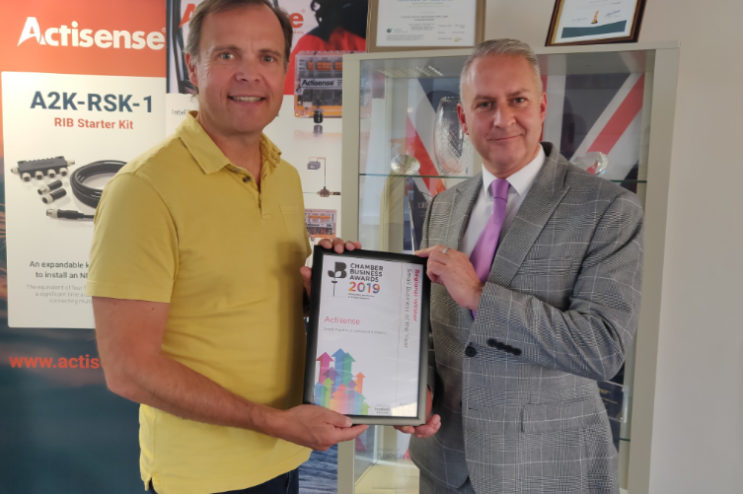 A Poole company which exports to over 80 distributors in more than 40 countries worldwide has been named regional Small Business of the Year at the British Chamber Awards.

Marine and agritech electronics firm Actisense, which was formed by chartered electronics engineer Phil Whitehurst 22 years ago, received the award for the south west region.

Actisense was the only company from Dorset to feature on the list of regional winners.

It will now represent the county at the national awards finals, taking place at the Chamber Business Awards gala dinner at Tobacco Dock in London on November 28.

Phil Whitehurst, who is Chief Executive Officer, said: “It was a wonderful surprise to receive a call from Ian Girling [Chief Executive of Dorset Chamber of Commerce] who let us know this great news.

“We’re proud to be a Dorset-based business and we look forward to flying the Dorset flag at the national award finals.”

Recognising and rewarding excellence in British business, the Chamber Business Awards is one of the UK’s most contested and prestigious business award programmes.

Each year, from Aberdeen to Cornwall, organisations of all sizes and sectors compete for the coveted titles and the national recognition they bring.

Francis Martin, President of the British Chambers of Commerce (BCC) said: “The Chamber Business Awards are a great opportunity to celebrate the best of British business.

“Across the country, there are firms of all sizes and sectors thriving and showing their innovation and adaptability, even in the midst of turbulent times.

“Each year the calibre of applicants impresses our judges, and this pool of entrants was no different. All our finalists should be proud of their success in reaching this stage and we wish them the very best of luck.”