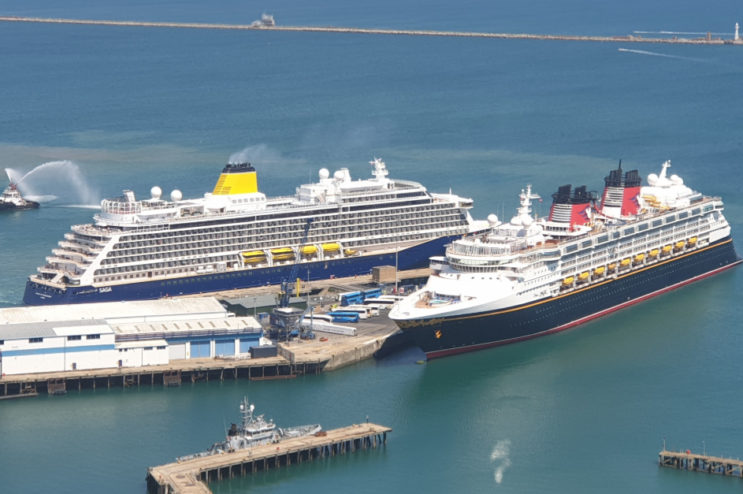 Saga Cruise’s new British flagged Spirit of Discovery made an inaugural call to Portland on her maiden voyage on the same day as Disney Magic this year.
By Andrew Diprose, editor editor@dorsetbiznews.co.uk

A Dorset port is set for another record-breaking year after announcing that it will be hosting 42 calls by cruise ships in 2020.

Portland Port’s 2019 cruise season has already been a spectacular one with the largest number of cruise calls and passengers to date.

In total it welcomed 41 cruise calls, 11 inaugural visits and one maiden voyage.

They included Norwegian Getaway, the largest ship to visit Portland this season, bringing the number of passengers handled by the port during 2019 to more than 60,000. 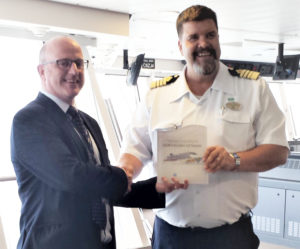 Ian McQuade exchanges plaques with the Captain of Norwegian Getaway.

Port chiefs have now revealed that 2020 is on course to be another record-breaker with 42 calls, including nine inaugural ones, spread between March and November.

New cruise lines will also be calling at Portland for the first time – Celebrity and Silversea.

Ian McQuade, General Manager (Commercial), said the last decade had seen the number of cruise ships visiting Portland Port growing substantially from just four calls and 2,000 passengers in 2009 to the record-breaking figures for 2019.

He added: “It is so exciting to see everyone’s hard work pay off with the ever-increasing number of cruise ships that are choosing to visit Portland Port and the local area.

“We thoroughly enjoy seeing the regular ships and are really looking forward to welcoming the new ones. Roll on 2020!” 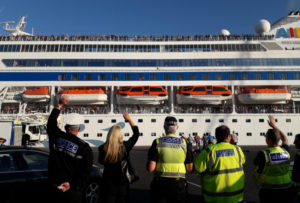 Based on figures from the Cruise Lines International Association relating to the economic impact of the cruise industry, Portland Port’s cruise business brings a significant benefit to the local and regional economy.

In 2018 Portland Port’s cruise business generated around €3.4 million of economic benefit, while in 2019 this figure rose to nearly €5 million.

Based on the current forecast for 2020 this figure could climb to just under €6 million worth of benefits to the area.

The port has paid tribute to the help and dedication of local groups and societies including The Rock Choir, Weymouth Concert Brass, The Weymouth Ukuleleans, Quangle Wangle, The Durnovaria Silver Band, The Dorset Wrecks and The Wessex Military Band.

The Nothe Fort Artillery also gave all of the ships calling at Portland Port this year a historic three cannon salute send off.