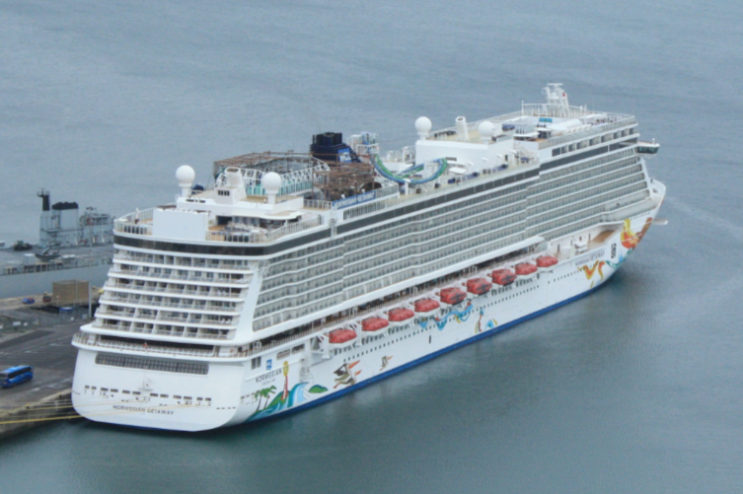 Norwegian Getaway, pictured at Portland Port, is the largest ship to visit the port this year with 3,963 passengers and 1,646 crew.
By Andrew Diprose, editor editor@dorsetbiznews.co.uk

A Dorset port has brought its 2019 cruise season to a spectacular finish by welcoming its largest ship.

Norwegian Getaway’s arrival at Portland Port not only marked its maiden call but also the longest and heaviest vessel to dock at the port this year.

The ship, one of 17 purpose-built freestyle cruising ships operated by Norwegian Cruise Lines, has a 145,655 gross tonnage and carries 3,963 passengers and 1,646 crew.

She was built in 2014 and refurbished this year.

At the time of her christening Norwegian Getaway was the world’s ninth largest cruise ship. Her overall length is 1,068 ft with a maximum beam of 169.7 ft. 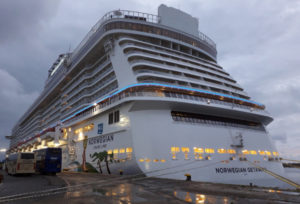 Portland Port lined up 12 coaches to take Norwegian Getaway passengers on excursions in Dorset and beyond.

The ship’s arrival in Dorset heralded the greatest number of passengers on one ship Portland Port has had to deal with so far.

It provided 12 shuttle buses to allow everyone on board to enjoy their time in Dorset and the surrounding area.

“We welcomed her sister ship, the Norwegian Breakaway, in 2018 and hoped then that she would be the first of many similar sized cruise ships to visit us. 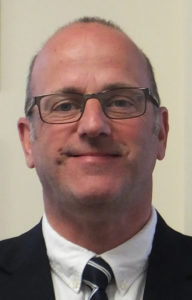 “Ending the season with such a momentous ship really has felt as if we have gone out with a bang, and everyone at Portland Port is already looking forward to 2020.” 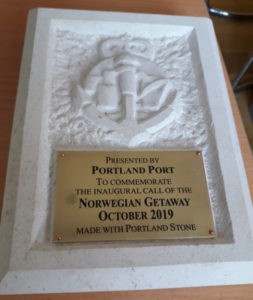 As is customary to mark a maiden visit, Portland Port presented the Captain of Norwegian Getaway with a plaque made from traditional Portland stone.

During the last decade the number of cruise ships visiting Portland Port has grown substantially.

This year has been a record breaking season with the greatest number of cruise calls and passengers to date.

Overall in 2019 the port has handled more than 40 cruise ships bringing around 60,000 passengers to the area.

“This is great for the local economy and a trend that Portland Port is keen to continue for next year,” added Mr McQuade.

Norwegian Getaway visited Portland Port as part of a repositioning cruise from Europe to the USA and Caribbean for the winter season.