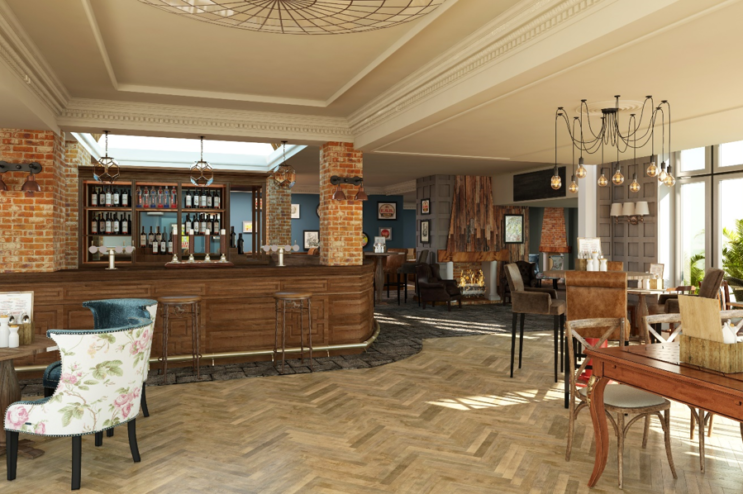 An artist’s impression of the interior of the new The Bear of Burton country pub and rooms in Burton.
By Andrew Diprose, editor editor@dorsetbiznews.co.uk

A listed building in a Dorset village is to reopen as a country pub with rooms after a £2m refurbishment.

Fuller’s, the pubs and hotels group, is opening The Bear of Burton, on the site formerly known as The Manor in March.

It has been renamed in tribute to Robert Southey, author of Goldilocks and the Three Bears, who lived in Burton between 1799 and 1805.

Fuller’s has completely refurbished the building to transform it into a pub with ten bedrooms and fresh-cooked food at its heart.

Some of the standout features will be a prix fixe lunch menu, afternoon tea, private dining rooms for groups of up to 26 people, and a Coravin wine system, allowing guests to sample rare wines, normally not available by the glass.

Fuller’s is also looking to maximise the location and views from the property by transforming the terrace and grounds.

Guests entering from the rear of the property will be greeted by the terrace, designed for outdoor dining or long evenings taking in the views.

Inside, guests will find a bar area for drinks or a more casual dining experience.

There are also several spaces in the restaurant suitable for private dining or special occasions.

Tania Cook, General Manager, said the food offering would be at the heart of the pub, serving breakfast, lunch, afternoon tea and dinner.

She added: “All dishes at The Bear of Burton will be freshly prepared by the team of talented chefs who will cook all dishes from scratch with passion and care using an abundance of fresh, locally sourced produce.

“The menu will reflect the seasons and the specials will change daily, so that foodies can experience an array of delicious dishes.”

The ten bedrooms will be named after local woods and the design will have subtle nods towards the Goldilocks and the Three Bears story.

The rooms will include 1600 pocket sprung mattresses, Nespresso machines and Roberts radios.

The company also has 1,028 boutique bedrooms in its managed estate.

The Fuller’s pub estate stretches from Brighton to Birmingham and from Bristol to the Greenwich Peninsula, including 174 locations within the M25.

The company also owns The Stable, a craft cider and gourmet pizza restaurant business, which has 16 sites in England and Wales including Bournemouth, Bridport and Poole.