Revealed (well sort of!): Lingerie shop wins national award in the ‘Oscars for the Undies’ 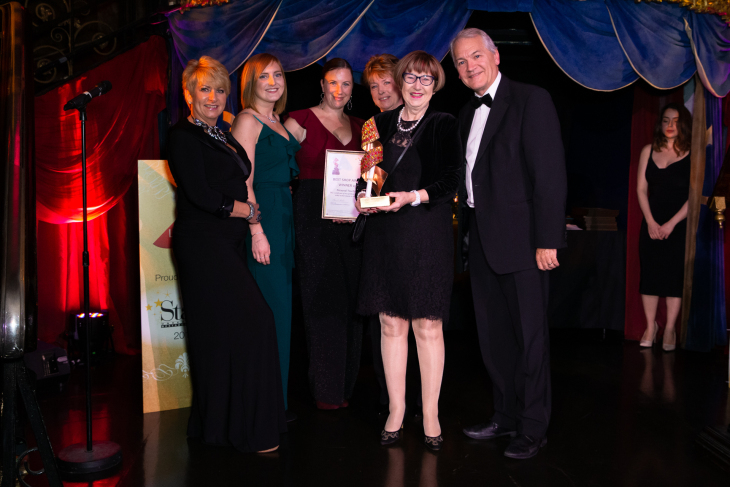 More than 300 guests attended the awards which are regarded as the ‘Oscars for the Undies.’

They are the only independent recognition of excellence in intimate apparel, swimwear and legwear retailing in the UK.

Shirley Allum, who was joined by her team at the ceremony, said the trophy would take pride of place in her High Street shop and she was “on cloud nine.”

She added: “The staff really deserve the award and I am so thrilled they won.”

The privately-owned business has been trading in Shaftesbury since 1997 and Shirley started her lingerie department eleven years ago.

The Stars Awards bring together the best stores, shops and e-commerce sites in the UK and Ireland.

More than 20 brands nominate finalists for their success in retail and e-commerce.

All categories except Excellence, Editor’s Choice and Supplier of the Year are determined by jury nomination and evaluation.

Shirley Allum Fashions has been nominated on two previous occasions, for the ‘Intimate Apparel’ and ‘Swimwear’ retail sectors.

However, it’s the first time the shop has won a category at the awards.

Shirley said she believed the recognition of her staff’s knowledge and customer service was ‘fabulous’ with the free bra fitting service offered by her shop being particularly important.

“Eight out of ten women are wearing a bra that is the wrong size,” she said.

Shirley has been in the fashion business for more than 40 years.

Since opening her first fashion shop in Shaftesbury 22 years ago, the store has grown from ladies fashions to lingerie.

Customers unable to make it to Shaftesbury to experience the service first-hand can purchase everything online at www.brashopuk.com