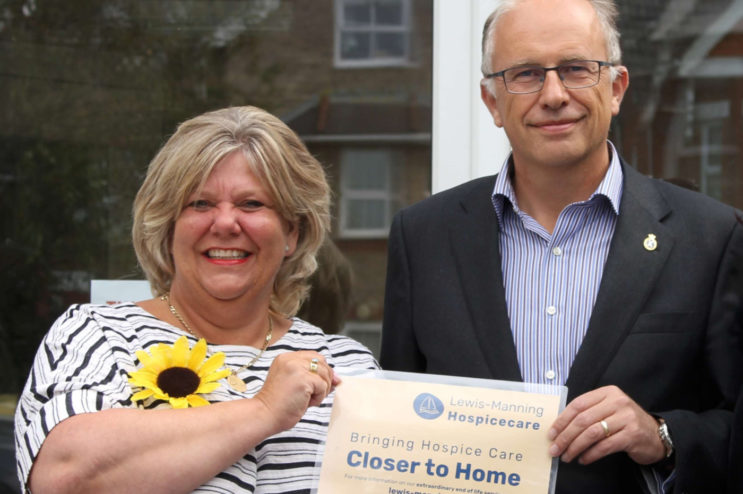 Philip Warr, former High Sheriff of Dorset and new Patron of Lewis-Manning Hospice Care, with the charity’s Chief Executive, Clare Gallie. The picture was taken before the lockdown and social distancing.
By Andrew Diprose, editor editor@dorsetbiznews.co.uk

“They’re the salt of the earth. Selfless, very committed and hard-working.”

The former High Sheriff, whose year-long term of office ended in March, has just been named as a Patron of Lewis-Manning Hospice Care.

He joins other patrons including Harry Redknapp, Her Majesty’s Lord-Lieutenant of Dorset Angus Campbell and actress Juliet Mills.

The Poole-based charity was one of many encountered during a busy year as High Sheriff.

Philip attended around 250 events, clocking up some 10,000 miles as he criss-crossed Dorset in his electric car.

It was, he admits, an eye-opener.

Philip said: “I’ve always been in private business but about 50 per cent of my involvement was with the public sector and other public bodies.

“I’ve served on local councils but my career has been mostly devoid of exposure to the voluntary sector.

“Remove one leg and the whole lot collapses.

“The voluntary sector will be even more important in coming months and years as the devastating effect on business and government finances of the present pandemic hit home.

“Without doubt in my mind there will be a greater reliance on the voluntary sector.

“I was so impressed at the people I met.

“They’re the salt of the earth.

“They have my total admiration.”

Philip is one of Dorset’s best-known businessmen.

A former Chairman of the Dorset branch of the Institute of Directors he is now Chief Executive of Purpose Homes.

Clare said: “As our relationship strengthened, Philip became a strong supporter, one well placed to help us with his extensive Dorset connections and to offer excellent advice.

“During the past year, Philip has made introductions to key people in the county, as well as offering help, advice, and support, especially with the move to Longfleet Road, our new ‘closer to home’ services, and expansion of services across Purbeck.

“He hosted an event at our former hospice premises in his role as High Sheriff, which was sponsored by Barclays Wealth Management, and has continued to make introductions to raise both funds and awareness for the work our charity carries out.

“This has allowed us to help more local patients, attracting new and much needed volunteers and ambassadors, as well as inspiring new fundraising initiatives.”

Philip, 55, said: “I am honoured and delighted to accept this patronage because I very much enjoy working with Clare and the team, all of whom are highly motivated to help the people of Dorset.

“I have seen and experienced first-hand the energy, drive, tenacity, dynamism and care of all involved in this wonderful charity, which is far too rare.”

From its new premises, at Longfleet Road in Poole, Lewis-Manning Hospice Care exists to help the people of Poole, Purbeck and East Dorset with life limiting illnesses.

The charity’s aim is to increase physical and social well-being, reduce isolation and loneliness, support people to stay in their homes longer, and alleviate the huge pressures on family and carers.