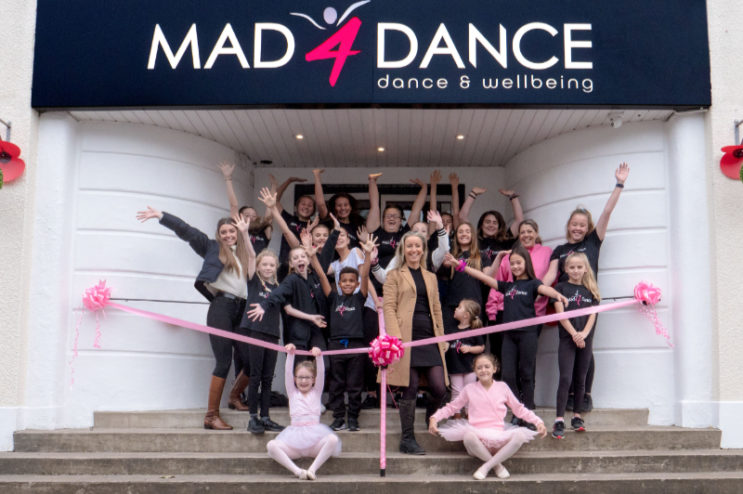 Julie Laming, Mad4Dance Founder, is joined by dance pupils for the official opening of the school’s new home in Bargates, Christchurch.
By Andrew Diprose, editor editor@dorsetbiznews.co.uk

A thriving dance school has celebrated its 15th year in business by moving into new premises in Christchurch.

Mad4Dance has taken over the ground floor of the Royal British Legion’s building in Bargates.

Founder Julie Laming was joined by a group of dance pupils for the traditional ribbon-cutting ceremony.

The dance school had been looking for a permanent home for several years.

Its arrival at Bargates followed 18 months of legal negotiations and a refurbishment of the premises which has so far cost more than £50,000.

Some of the money came through community fundraising and donations.

Parents of pupils also gave their time and trade services for free in order to create three new dance studios, changing rooms, a chill out space and kitchen.

Julie said her school would inject a new lease of life into the building while retaining its history and character.

She added: “I was moved and deeply grateful for all the support of my team, students and parents who gave so much time and hard work to help make this project possible.

“There is still work yet to be done, but I am confident that we will get there.”

Mad4Dance has taught more than 1,000 children over the last 15 years.

The school currently teaches 200 pupils aged from three to 18 years and over with up to 30 classes per week.

She also intends to launch a charity next year, based at the school, which will focus on supporting young people in the local community.

The school’s opening is to be celebrated with a Christmas party in early December. There are also plans to host an official open day for the local community in mid-January.

The Royal British Legion will continue to use the upstairs of the building.