Premier luxury brand Sunseeker International is to double its range to 22 models quicker than planned.

The Poole-based company, together with backing from its majority shareholder Dalian Wanda, is investing additional working capital with immediate effect in order to accelerate its expansion plans.

It is investing more than £38m in new product development between this year and 2023 resulting in the expansion of its range.

The company has described this as a remarkable achievement against the background of a global pandemic. 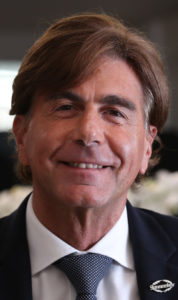 Andrea Frabetti, CEO at Sunseeker International, pictured left, said: “This significant support reflects our shareholder’s belief in the entire Sunseeker team and its commitment to our business, brand and manufacturing in Dorset.”

Sunseeker International has been back to full production since June as it continues to design, manufacture and deliver the world’s leading luxury performance motor yachts.

Andrea said: “I’d like to personally thank our clients, suppliers and employees for supporting us during what has been one of the most challenging periods the global leisure marine industry has ever faced.

“During the crisis, we have remained fully focused on our strategic plan to not only retain our market-leading position but to gain market share by remaining resolutely focused on innovation across multiple new and exciting niche models.

“We have seen strong market confidence throughout this period and are very much primed for future growth and success.”

Sunseeker employs about 2,000 people and produces around 150 boats every year ranging from 38-161 feet.

Next year Sunseeker International will launch its first production yacht with hybrid power.

Originally named Poole Power Boats, the company was founded by brothers Robert and John Braithwaite in 1969.

The company changed its name to Sunseeker International in 1985 and has since become a global icon.

In August 2013 a majority stake in the business was acquired by Wanda Group, the Beijing headquartered conglomerate with strong footprints across China, Europe and the US.