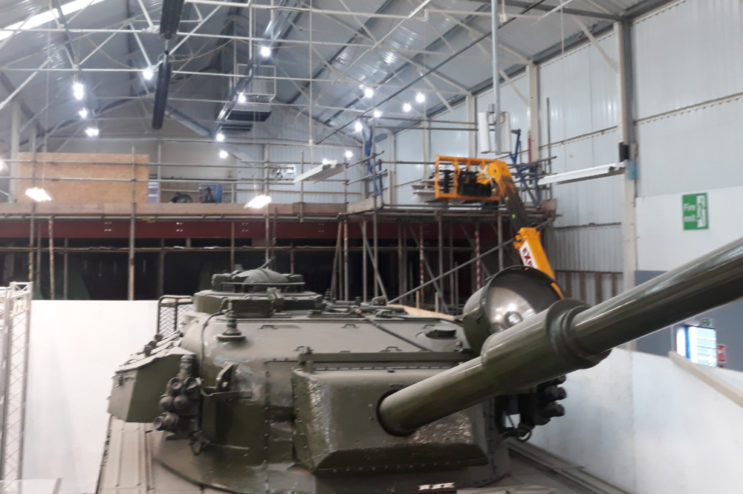 Work by Greendale Construction is being carried out at The Tank Museum around exhibits.
By Andrew Diprose, editor editor@dorsetbiznews.co.uk

A Dorset building company has faced many challenges in its 29-year existence – but never working around a tank.

Poole-based Greendale Construction has started a five-month project to create new office space for staff at The Tank Museum in Bovington as well as refit existing accommodation.

The work – due for completion in mid-February next year – is being carried out while the popular tourist attraction stays open with minimal disruption to visitors.

It includes the removal of an existing mezzanine level and stairs, strip-out of existing offices, the construction of a new mezzanine floor for the newly built extended offices and a full refit of the existing office space. 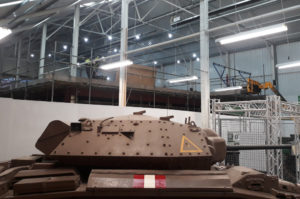 During the project, Greendale has the tricky task of working around half a tank stationed on the ground floor which cannot be moved for the works.

Chris Kane, Greendale Construction Director, said: “Greendale loves a challenge and is experienced with working to tight schedules, limited space and tricky logistics, but it’s the first time our teams have had to work around half a tank!

“However, nothing fazes us, and we are proud to be working at Dorset’s largest indoor attraction and look forward to handing over the much improved office space in February.”

Based at Bovington, the main training centre for tanks in the First World War, The Tank Museum boasts one of the world’s best collections of tanks and live exhibitions, telling the story of armoured warfare from World War One to the present day.

Richard Smith, Director of The Tank Museum, said: “In the last ten years The Tank Museum’s visitor numbers have doubled and our workforce increased – but our staff facilities remain the same size that they were in 1984.

“This development will address the issues of overcrowding and give our team a pleasant working environment.”