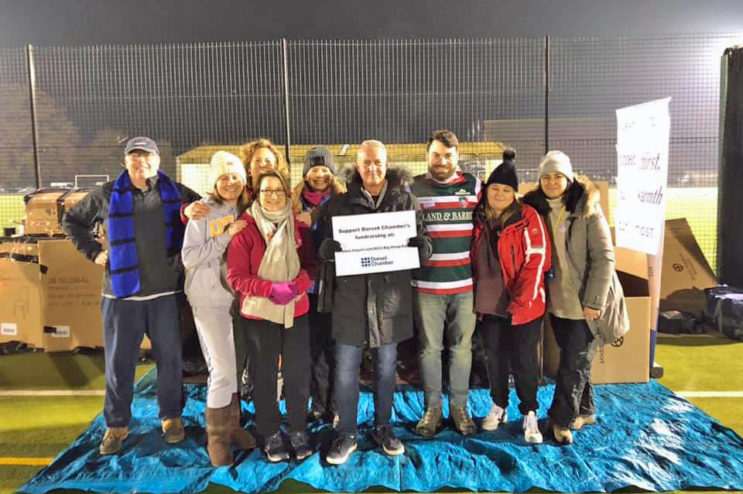 Fundraisers from ‘Team Dorset Chamber’ joined 160 individuals from 40 organisations to sleep outside in sub-zero temperatures in shelters made from cardboard boxes.

Organised by YMCA Bournemouth, the event was hosted by Bournemouth Sports Club (Chapel Gate) with the aim of raising awareness of homelessness in the area and provide funds raised through sponsorship for YMCA projects.

Ian Girling, Dorset Chamber’s Chief Executive, who was among the people taking part, said: “The temperature plummeted to -2 degrees overnight and it was very, very cold in the shelters.

“It made us all realise how hard living and sleeping in these conditions really must be day in, day out.

“At the briefing we heard from YMCA’s senior operations manager Martin Stockley that YMCA Bournemouth had a 100 per cent success rate with the individuals it worked with last year.

“Fundraising through this event plays a significant role in supporting this important work, which aims to keep individuals safe from homelessness over the long term.”

With almost double this number taking part this year, the total raised will be announced after December 15.

YMCA Bournemouth has also held events at secondary schools throughout the year, with students and staff taking part.

“Donations to the charity are still welcome through our team’s Virgin Giving fundraising page at www.tinyurl.com/DCCI-Big-Sleep-Easy which is live until December 15.”

YMCA Bournemouth is part of the Street Support Network which supported the event alongside event sponsor Lester Aldridge.