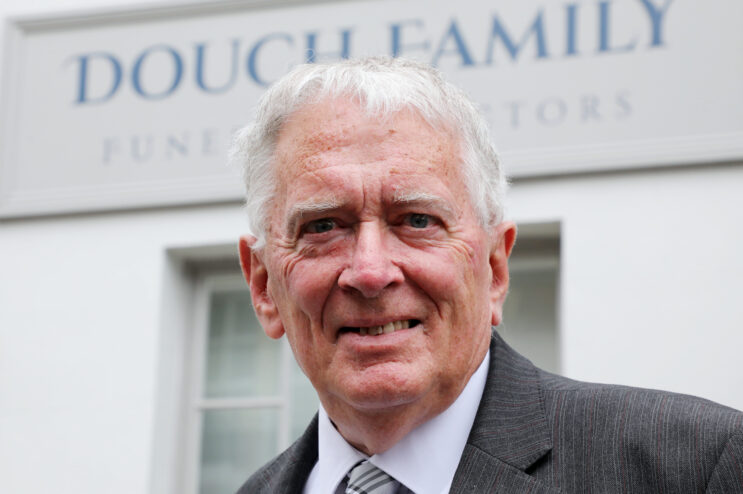 Peter Douch, who is retiring from the family business after 28 years.
By Andrew Diprose, editor editor@dorsetbiznews.co.uk

The Chairman of a well-known Dorset business has finally stepped down from the Board of Directors after a long career that’s seen him work around the world.

Peter Douch, 75, has been involved in the family funeral business since 1994, after a career as a Chartered Accountant.

Founded in 1909 by Peter’s grandfather, Fred, in Wimborne, what became known as Douch Family Funeral Directors was initially a furniture and furnishing business.

Furniture led to coffins – and coffins led to funerals.

When Peter joined as Finance Director in 1994 it had just two of its furniture shops left and three funeral branches.

It is now solely dedicated to funerals with seven branches across Dorset and an award-winning funeral plan.

The business employs about 50 staff.

After leaving school Peter trained as an accountant in Poole and secured his first post-qualification job in St Lucia.

It was there he met his wife Josephine, a nurse.

But they had to spend many months apart after Peter accepted a new job as an Internal Auditor with the export division of Coca-Cola.

It meant travel in the USA as well as central and South America.

Returning to St Lucia in 1976 to get married, he became Manager in Dominica of accountants Coopers & Lybrand.

Peter secured a job back in St Lucia in 1978 with the local brewery, majority owned by Heineken, where the couple lived with their four sons, Dweyn, Nick, Quentin and Andrew, until a move to England in 1988.

The family settled in the Wakefield area of Yorkshire where the children were schooled and Peter worked for a management consultant in Bradford.

In 1994, Peter’s father, Jack, was running the family business and he moved down to join the company as Finance Director. 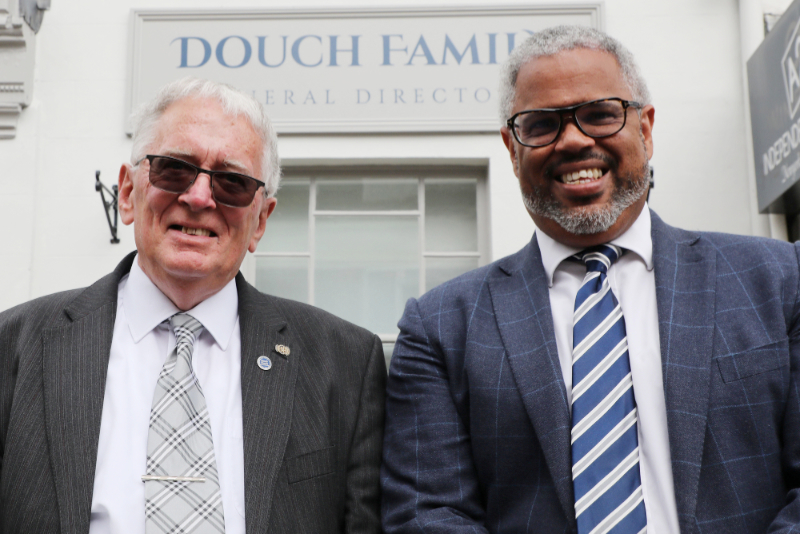 Later he became Managing Director and, in 2011, when his son Nick, pictured with Peter, took on that role, he became Chairman.

Peter said “We closed the remaining furniture shops in the 1990s to concentrate on funerals.

“Once we had furniture shops from Portsmouth to Weston-super-Mare and a workshop in Wimborne which once employed 40, but the furnishings market had changed.

“My father ensured I worked in all aspects of the funeral business so I would know it inside out – from arranging and conducting funerals to coffin bearing.

“It is a grounding that was important and one that I impressed on my children.

“After closing the furniture business, we added to the funeral branches we had already, which were FC Douch & Son in Wimborne, AE Jolliffe in Ferndown and James Smith in Swanage.

“We acquired Albert Marsh of Wareham and Upton in 1999, Lesley Shand in Corfe Mullen in 2000, Anthony Ives of Parkstone in 2005, Charles Small in 2010 and in 2015 we opened a branch of Lesley Shand in Blandford.

“More recently we have embarked on a large-scale investment programme with the Corfe Mullen branch being completely rebuilt and the Ferndown branch now undergoing a major rebuild and refurbishment.

“With my family heavily involved in local sport – especially cricket – for years, we have sponsored many teams and leagues and for more than a decade sponsored the Dorset Cricket League through our Dorset Funeral Plan.

“With Nick as Managing Director I can now step back and spend more time between here and St Lucia.

“Retirement will also give me time to complete my task of visiting every football league ground in Scotland – I have 19 left.

“I have already done the English league grounds excepting the new ones at West Ham and Brentford, as well as all the county cricket grounds.

“It is also gratifying to know that two of my three grandchildren work in the business – the fifth generation.”