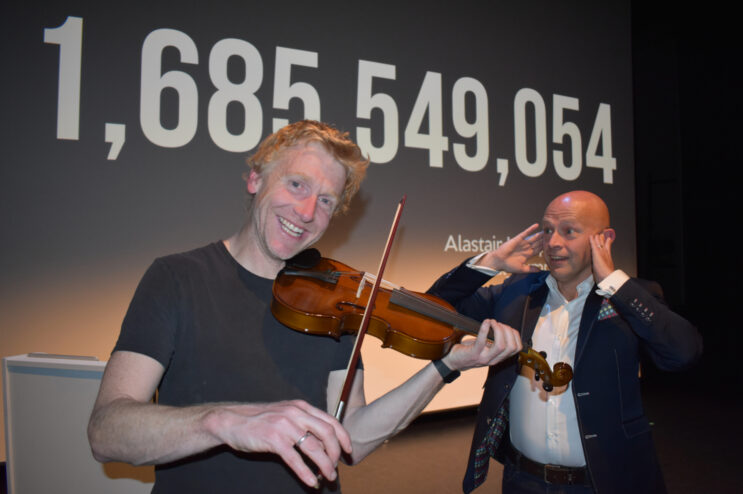 Adventurer Alastair Humphreys demonstrates his prowess on the violin to Evolve Founder Warren Munson as the ‘death clock’ counts down in the background. Picture: Dorset Biz News.
By Andrew Diprose, editor editor@dorsetbiznews.co.uk

Adventurer Alastair Humphreys message was both inspiring – and sobering.

We all have a finite amount of life on earth so make the most of every precious moment.

And that means injecting some adventure into your life.

It doesn’t need to be on the scale of his most epic challenge, involving cycling 46,229 miles across five continents and 60 countries and taking four years.

Or even the adventure of playing – badly – a violin but, in his case, still managing to earn a crust from busking across Spain.

Instead, a series of what he describes as microadventures.

Defined as close to home, cheap, simple, short but guaranteed to refresh your life.

Effectively taking the spirit of a big adventure and squeezing it into a day or even a few hours.

It could be exploring nearby streets, sleeping on a hilltop, going for a wild swim or, perhaps, walking home for Christmas.

Alastair, who has written 13 books including one on microadventures, was opening the BCP Business Festival at Pavilion Dance South West in Bournemouth.

Funded by BCP Council’s Bounce Back Fund, the series of events are organised by Evolve, the Poole-based community for entrepreneurs and business leaders, in partnership with business and tax advisors, Inspire. 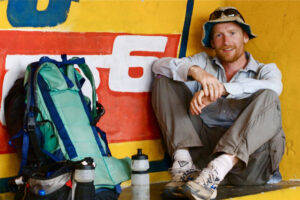 Named as one of National Geographic’s ‘Adventurers of the Year’ in 2012, Alastair has more recently:

To highlight the comparatively short time we have on earth, Alastair brought up on screen one of the internet’s ‘death clocks’.

It can supposedly predict a person’s death to the day, based on supplied information.

The father of two urged the business audience to take what the Scandinavians describe as ‘The Doorstep Mile’.

Effectively it means the first mile away from your front door which can be the hardest of all.

Alastair said: “Try and live a little adventurously every day.”

Warren Munson, Founder of both Evolve and also Inspire, described Alastair as “inspirational” and said he demonstrated how adventure can start on your doorstep.

‘An Evening with Alastair Humphreys’ was the first of a ten-day programme of free events for business leaders, designed to help them bounce back from the impact of the pandemic.

For more information on the BCP Business Festival and to book your place, visit Evolve.

King of style: How John has lived and breathed... 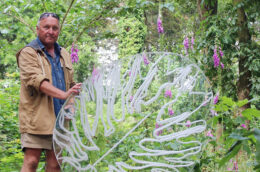 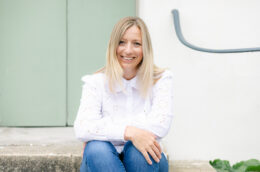 Chance to meet, chat and collaborate as Laura... 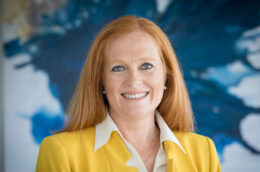 Switch off! Separate your home and work life and make...