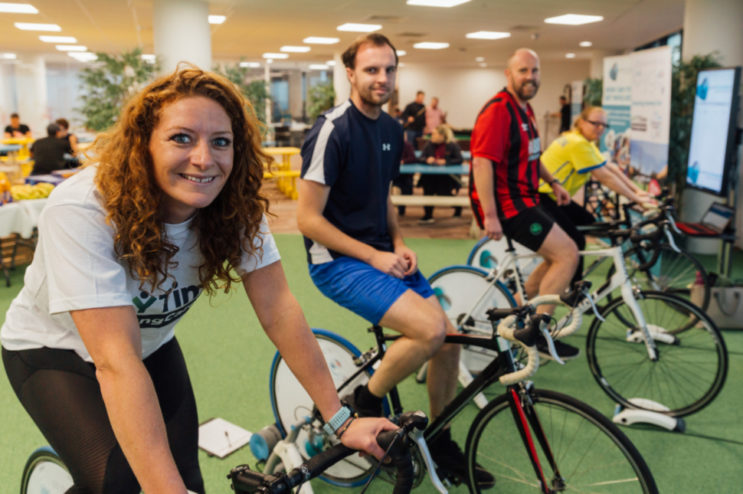 Staff at a Dorset-based telecoms company have raised more than £26,000 to date by quite literally getting on their bikes.

More than 100 team members at 4Com took part in a 24-hour virtual cycle ride as part of a dual fundraising charity challenge.

The aim was to cover the distance from Paris to Bournemouth but then carry on and achieve as many kilometres as possible to maximise the amount of money raised. 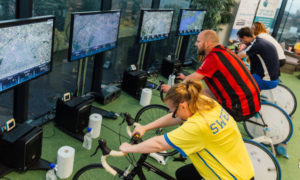 In the event they achieved a distance of 1,700 kms, the equivalent of two round trips from Paris to Bournemouth.

The 4Com cyclists took 30-minute ‘shifts’ on the static bikes in order to achieve their goal, even cycling through the night.

Four bikes were set up, with at least one bike always in action.

Cyclists could even see their journey as it happened as the bikes were linked to TV screens, which detailed the route.

Staff within the business didn’t miss out on any of the action as the cycle journey was livestreamed to all eight floors of 4Com’s Lansdowne Plaza office in Christchurch Road, Bournemouth.

The money raised will go to MYTime Young Carers and the Alzheimer’s Society.

Dean Cartledge, 4Com Director, said: “Charity is an integral part of our business culture, it’s hugely important to us.

“We like to get the staff involved in our fundraising challenges and make them feel a part of each initiative. 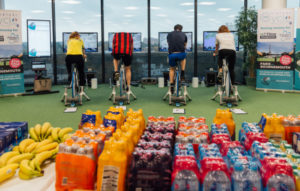 “We are hugely proud of staff commitment shown for this virtual cycle challenge, with over 100 staff participating and many more making donations.”

She added: “A massive thank you to the incredible staff at 4Com for choosing to support MYTime with their virtual bike ride and skydiving event.

“Through the hard work and commitment shown by the staff at 4Com, MYTime will be able to provide young carers with a break at our outdoor centre in Worth Matravers.

“These breaks are an invaluable opportunity for young carers to have fun, make friends and to take some time out from their caring responsibilities.”